The successful docking happened at 9:03 AM Eastern time, and it marks the first time a private American spacecraft has been sent to the ISS. Station commander Sunita Williams says, “Looks like we’ve tamed the Dragon. We’re happy she’s onboard with us. Thanks to everyone at SpaceX and NASA for bringing her to us…and the ice cream.” 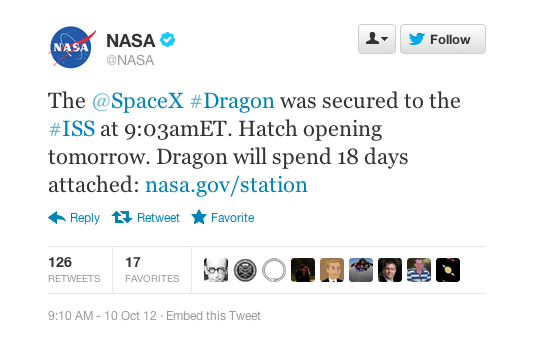 The SpaceX Dragon capsule carried almost 1,000 pounds of supplies as it made the journey to the ISS some 250 miles above the Pacific Ocean. Along for the ride was chocolate-vanilla swirl ice cream and materials to make Silly Putty, which will certainly be a fun experiment for the astronauts as they find out what space-made Silly Putty will act like compared to down on Earth.