SpaceX docks with ISS: “Looks like we caught a Dragon by the tail”

NASA and SpaceX have made history today, with the International Space Station reaching out and grappling the Dragon capsule with its robotic arm. The culmination of a three day flight and numerous tests of the safety functionality necessary to protect both Dragon and the ISS, the team aboard the orbiting space platform guided the robotic arm to pluck the capsule out of the sky at 9:56 ET this morning.

In the hours preceding the successful grapple, SpaceX gradually piloted the capsule in toward the ISS, pausing at the 250m hold-off zone while NASA did further tests. Astronaut Don Pettit was responsible for controlling the robotic arm that picked up Dragon.

Next up comes the equally lengthy process of pulling Dragon into the ISS, and temporarily installing it onto the Harmony node. That’s expected to to take a further few hours.

In the end, the astronaut may go down in history for coining the 21st century equivalent of “One small step for man,” as famously said by Neil Armstrong on the first moon landing. “Houston Station, looks like we caught a Dragon by the tail” he told ground control.

NASA has already inked a contract with SpaceX to run a total of twelve missions to the International Space Station, sending up supplies and scientific equipment now that the space agency’s own Space Shuttles have been grounded. 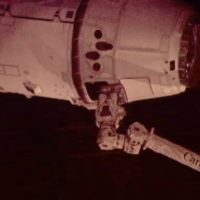 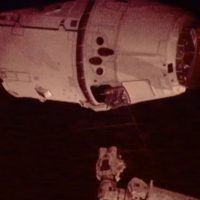 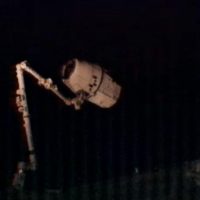