Sony has officially launched the Xperia Z Ultra, an even larger version of the Xperia Z fronted by a 6.4-inch Full HD display and waterproof just like its smaller sibling. Billed as the world’s largest Full HD smartphone, the Xperia Z Ultra features Sony’s TRILUMINOS technology – as on the company’s BRAVIA HDTVs for more accurate colors and contrast.

There’s also X-Reality for mobile for optimizing photos and video to look their best on the panel, including upscaling lower resolution content to suit the 1080p the Xperia Z Ultra offers.

Just as Sony pushed its waterproofing on the Xperia Z, the Z Ultra is also unafraid of a dip in the pool. In fact, it’s even more resilient than the previous model, now certified to IP58 versus the IP55/IP57 of the Xperia Z. Sony says it’s the same width as a passport, which the company claims makes it fit more readily in the hand; actual specs are 179 x 92 x 6.5mm and 212g.

As for software, Sony has fettled its media application suite, with a new WALKMAN app, Movies app, and Album app. They get updated sharing functionality, as well as better integration with the cloud. Underneath is Android 4.2 Jelly Bean.

Inside, there’s 4G LTE connectivity along with Qualcomm’s Snapdragon 800 MSM8974 quadcore processor running at a whopping 2.2GHz. That’s paired with an 8-megapixel Exmor RS camera and a battery good for up to 14hrs talktime or 790hrs standby, Sony claims. NFC, WiFi, and Bluetooth are all included.

Interestingly, the touchscreen will also recognize “any” stylus with a conductive tip, including a regular pencil, allowing Xperia Z users to sketch or make notes with whatever comes to hand. 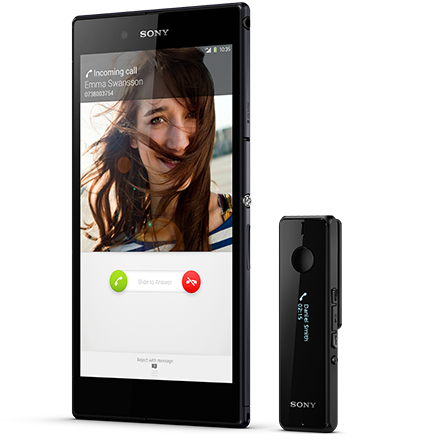 The Sony Xperia Z will be available in three colors – black, white, and purple – and sold alongside a new accessory, a water-resistant Bluetooth “mini handset” presumably for those times when holding a 6.4-inch phablet to the side of your head feels somewhat ridiculous.

No word on pricing at this stage, but the Xperia Z Ultra will launch globally in Q3 2013.