Sony Xperia XA might skip US, no X Performance for UK, Germany

At MWC 2016, Sony made a surprise announcement, revealing not one, not even two, but three new smartphones under a new Xperia X series. Naturally, there is no small amount of guessing, sometimes even wishing, which markets will get all three or at least even just one of the new devices. Sony’s numerous Twitter accounts for different markets, as well as certain retailers and carriers, have been quick to shout out t. But equally important are what these tweets are actually not saying.

Despite being a, if not the, major mobile market, the US has usually received the short end of the stick when it comes to Sony’s smartphones. The Xperia Z5, for example, arrived without a fingerprint scanner. So there is unsurprisingly some anxiety about which models will be arriving in the market. Sony was happy to share that the Xperia X will indeed be available in the US. When that happens is a different question, but at least now it’s a question of when, not if. But while Sony’s tweet explicitly only mentions the Xperia X, the company’s US website does have both the Xperia X and the Xperia X Performance. Noticeably missing is the Xperia XA.

The situation is reversed and a bit less defined in Europe. Several UK carriers, like Three, EE, and Vodafone, have tweeted about the Xperia X and Xperia XA coming soon and that seems to also be the case in Germany. This time, there is no mention of the higher-end Xperia X Performance at all, though there is speculation that it will be available in other European markets, just not the UK and Germany. When asked, Sony went around the question, answering only that the Xperia X Performance has a focus in key Asian markets like Taiwan, Hong Kong, and, of course, Japan.

It isn’t out of the ordinary that OEMs make different models available or unavailable in certain markets, though sometimes you are left wondering what specific factors lead to these decisions.

The Xperia X is the base model for the three new smartphones under the “re-imagined” Xperia brand. It sports a 5-inch Full HD screen, running on a Qualcomm Snapdragon 650 with 3 GB of RAM. The Xperia X Performance, on the other hand, bumps the processor up to a Snapdragon 820 but mostly stays with the same specs. Highlights of these two include the new Predictive Hybrid AF in the whoppping 23 megapixel main camera sensor, a 13 megapixel front shooter, and Adapative Charging technology to boost the life time of the Xperia X’s 2,620 mAh battery and the Xperia X Performance’s 2,700 mAh power pack. 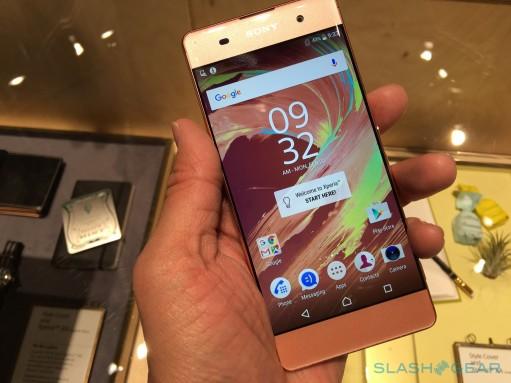 On the other hand, the Xperia XA is more like the budget model of the new line, with only an HD screen, a MediaTek processor, 2 GB of RAM, and a lower 13 megapixel and 5 megapixel camera pair. What makes this smartphone unique, however, is its design. In particular, the screen stretches through the whole width of the surface, making it appear to have no bezels at all.

Specific availability details, especially the price, have yet to be announced.