Sony is still causing no amount of frustration among would-be VAIO P buyers with the various levels of configuration and the bemusing differences in availability.  Three processors have been employed – ranging from the 1.33GHz Atom CPU you can buy in the US, through the 1.60GHz version, and up to the 1.86GHz VAIO P that you’d have to source through importers if you wanted it.  Now there are finally benchmarks of all the different configurations (including SSD and HDD versions) to help decide.

Full benchmark results after the cut 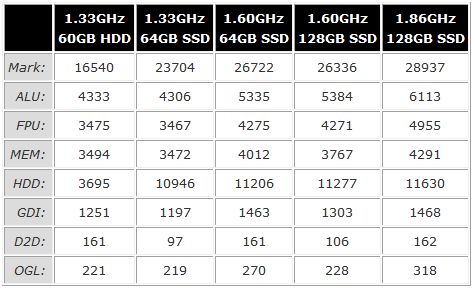 The benchmarks have been compiled by the VAIO P forum over at Pocketables, whose membership usefully crosses over all the geographic boundaries that makes picking up the full Sony range so tricky.  Their tool of choice is CrystalMark.

As the numbers show, there’s no performance difference between the 64GB and 128GB SSDs, and in fact the biggest difference in the US 1.33GHz model comes from the choice of storage, not so much the CPU.  Overall, though, it’s further proof of how much of a mistake Sony are making in not offering the faster processors in every area; one of the VAIO P’s regular criticisms – in our review and others – was the performance not matching up to the hardware’s potential, and it looks like the 1.60 or 1.86GHz models could go some way to answering that.