You love charts, we love charts, and Sony sure loves charts when they confirm PS3 sales were headed skyward in 2010. The company has released its full-year 2010 financial results (up to March 31 2011) and revealed that 14.3m PlayStation 3 consoles were sold in the twelve month period. Interestingly, though, 2010 holiday season sales (Q3 on Sony’s calendar) were down in comparison to 2009, from 6.5m to 6.3m, while the three month period at the start of this calendar 2011 also dipped year-on-year.

So, even though Sony sold 1.3m more PS3 consoles altogether in 2010 compared to 2009, it looks like sales could be slowing. The in-house analysts obviously agree, since the estimates for 2011 at 15m, an increase of just 0.7m in comparison. The figures also show how important the incoming Sony NGP is, since PSP sales dropped almost 2m to 8m in 2010, and Sony expects that to drop to 6m in 2011.

Elsewhere, PMP sales actually beat Sony’s estimates, though that’s a rare glimmer of success. LCD TVs, camcorders, Blu-ray players, DVD players and PCs all missed their forecasts. Operating income overall was up, but the unfavorable exchange rate – among other factors – meant Sony didn’t pocket as much cash as it might have hoped. 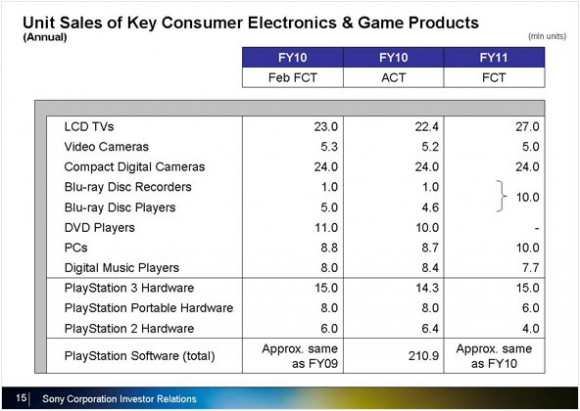