Although Sony is still a big name in the industry, it no longer has the same force it had back in the days. It sold off its VAIO PC business to shed some unnecessary weight and it seems that its mobile devices might soon be on the way out as well. On the other hand, it also needs new businesses and products to keep it afloat, but a risk-averse culture and financial considerations keep it from jumping into more adventurous pursuits. The solution? A crowdfunding platform that encourages experimentation but, at the same time, shields it somewhat from failure.

It seems that Sony has learned a few tricks from Kickstarter, which it may or may not have also learned to game. Whatever the case may be, it has probably realized that it can’t simply invest in new products that may not appeal to customers but neither can it wait for the right product to just drop from the sky. It needs to be able to gauge consumer interest in a reliable manner. And when it comes to creating a litmus test for interest these days, nothing beats crowdfunding.

First Flight, however, is more than just a Sony-made Kickstarter. It is both more and, at the same time, less. More, because crowdfunding is actually only one part of the online platfrom. It also serves as a launching pad for previewing new business and product ideas as well as behaving as an e-commerce platform after the product has been funded and shipped. Less, because all proposals are made by Sony employees only and, at least for now, only Japanese customers can take part of the crowdfunding campaign. Naturally, the website is all in Japanese as well. 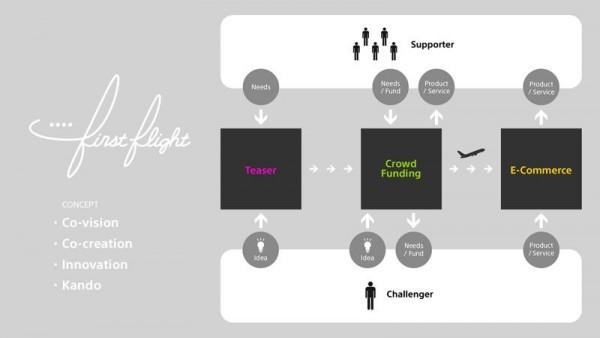 There are three products that will launch with First Flight’s maiden voyage, two of which we’ve already seen before. There is MESH, the DIY inventor kit that already made its way to Indiegogo last March. Somewhat more interesting is FES, the smartwatch that used e-ink not just on the circular watchface but also on the strap, designed to combine technology and fashion. New to the group is another e-paper device called HUIS, a universal remote control that adapts to your needs.

It is interesting that Sony would resort to this strategy, though it does tie in with its seeming newfound interest in using, maybe even exploiting, the power of the crowd to test drive its products without putting to much risk in its hands. Admittedly, it’s also a smart way to inspire creativity within its own offices. There is no indication yet if Sony plans to take First Flight globally, but when it does, or even for those in Japan, people should always remember the risks that crowdfunding platforms inherently have, especially one that’s specially designed for a specific company’s benefit.