A tiny sub-display, for remotely-controlling your Android smartphone and sneaking glances at incoming messages when you probably should be paying attention in class, in meetings or in the midst of romantic dinners: what’s not to like about Sony Ericsson’s LiveView? The compact OLED display promises to pick out the most important updates from your smartphone and push them out to your wrist or wherever you have the LiveView clipped, but does the real-world experience live up to the marketing promise? Check out the full SlashGear review after the cut.

Measuring in at 35 x 35 x 11 mm, the plastic-bodied LiveView is a lightweight if somewhat thick black square, fronted by a 1.3-inch 128 x 128 color OLED display. On the back there’s a metal clip, sturdy enough to keep the LiveView fixed snugly to your lapel or the shoulder-strap of your bag; Sony Ericsson also supply a nylon wrist-strap and a plastic frame assembly to turn the LiveView into a chunky watch. Hardware controls are limited to a power button with integrated multicolor LED on the top left corner and a second button on the top right; on the bottom edge there’s a microUSB port for charging, covered with a somewhat fiddly rubber flap. 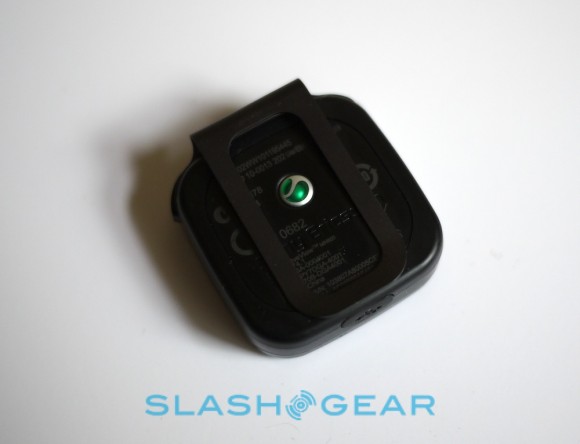 Unfortunately there’s no touchscreen – likely to keep the price down – and instead the bezel around the display hides four touch-sensitive directional controls, with the right physical button acting as select. It’s not as intuitive as, say, sweeping the display on the iPod nano. As well as flashing its notification light, the LiveView also has a vibration motor inside for discrete updates of new messages, calendar appointments and the like. It’s not the most powerful we’ve seen, but it’ll get your attention, particularly if you have the display clipped to your wrist.

Sony Ericsson get points for not making the LiveView an accessory solely for their own range of XPERIA smartphones, and more again for opening up the SDK for third-party developers. Instead, it’ll work with most Android smartphones running OS 2.0 or above, and the LiveView application – which runs in the background on your phone – is freely available in the Android Market.

It’s not quite as straightforward as installing the app and going from there, though; there’s actually a second app, Sony Ericsson LiveWare, which the company tells you to install first and then which guides you through the LiveView installation. It’s not entirely clear from the description of either app as to the differences, which could well lead to confusion, especially as – when we tried running both or just the LiveView app on different devices – we couldn’t see any particular difference in operation. 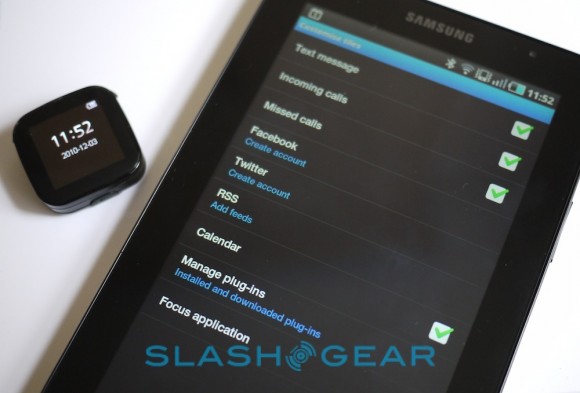 Out of the box, the app supports incoming calls, SMS, Facebook and Twitter updates, along with basic media player control, RSS headlines and date/time. It’s straightforward to toggle each on or off from the app’s settings – if you don’t want to use the RSS functionality, you don’t have to see it on the LiveView’s display – and you sign into Facebook and Twitter independently from any other apps you may be using on your phone. If you’re reading an SMS or RSS excerpt and want to review it (or, indeed, reply to it) on your phone, hitting a button automatically opens that page on the handset itself. 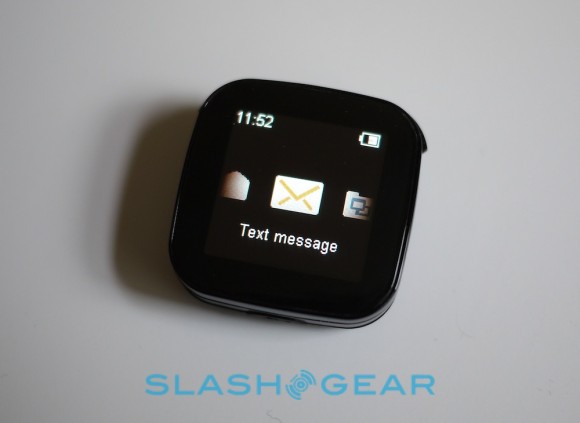 There’s also a “plug-ins” option, which opens the LiveView up to third-party apps also distributed via the Android Market. So far, with the sub-display in its infancy, the choice is limited; there are weather and Gmail apps, together with a “Where Am I” app which shows your current position in a zoomable snapshot from Google Maps, along with a few others.

Unfortunately, while the premise has merit, the actual experience of using the LiveView falls well short. Most frustrating are the regular connection failures, with the LiveView randomly dropping its link to the various handsets we tested it with and then proving unable to re-connect. Most of the time either power-toggling Bluetooth or the sub-display itself addressed the issue, but it happened far too frequently for our liking.

Navigation, too, felt more convoluted than it should be. The menu layout should be straightforward – cycle through the top level of Sony Ericsson’s native apps with the left/right touch keys, select with the right-hand physical button and then move up and down lists of RSS headlines or missed calls with the up/down keys – but all too often presses would fail to be recognized. We also found the LiveView would often stall, refusing to back out to the main menu and instead leaving us either looking at a blank screen or simply the status bar of time and battery life. 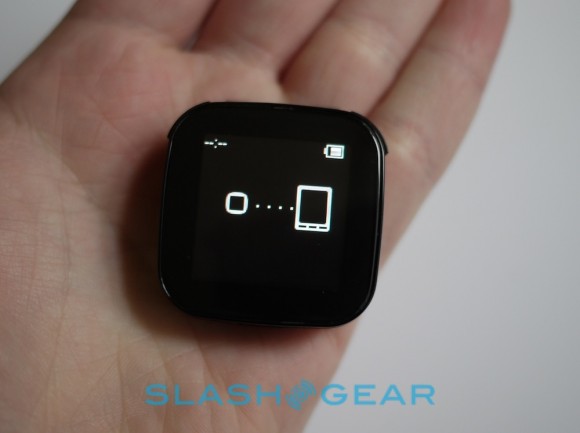 Integration between phone and LiveView is also patchy. There’s no access to existing phone call logs or messages, only those that come in from the point you connect the LiveView, and you can’t browse through your calendar entries, only see alerts on those you’ve set notifications for. Bizarrely, while the included watch strap obviously positions the LiveView as a timepiece, it’s entirely dependent on your phone for the actual time. Lose connection, and it caches neither time nor date.

The LiveView works best with the simplest functionality: incoming calls. The sub-display shows the number of the caller and, if they’re saved in your phone’s address book, their name as well. You can mute the ringer but not actually answer the call; the LiveView doesn’t work as a Bluetooth speakerphone, so your Dick Tracy ambitions will go unachieved. If you’ve lost the phone itself, a locator function will make it chirp until you find it, though if your handset is set on vibrate or silent it won’t make a noise. 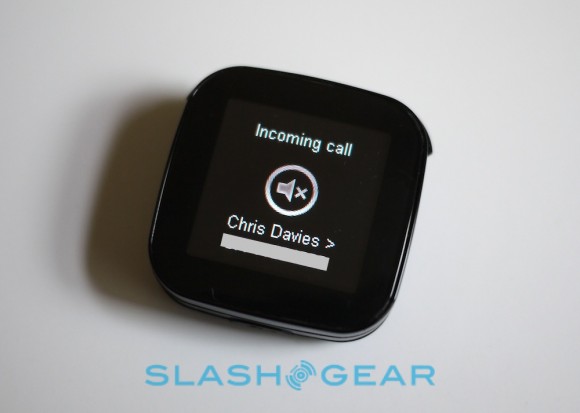 It’s also possible to control the normal Android media player – though not any third-party media apps, such as Spotify – using the LiveView’s buttons, with basic track skip, volume and play/pause functionality. You also see track information, though nothing more than artist and title.

As for the third-party plug-ins, we had mixed results with these, too. The Gmail app does what you’d expect, though is relatively bare when it comes to options for things like frequency of updates, and the weather app does what it promises. We had high hopes for the Where Am I app, imagining discrete navigation from our wrist rather than pulling out a phone and looking like a tourist, but the reality was somewhat less impressive. 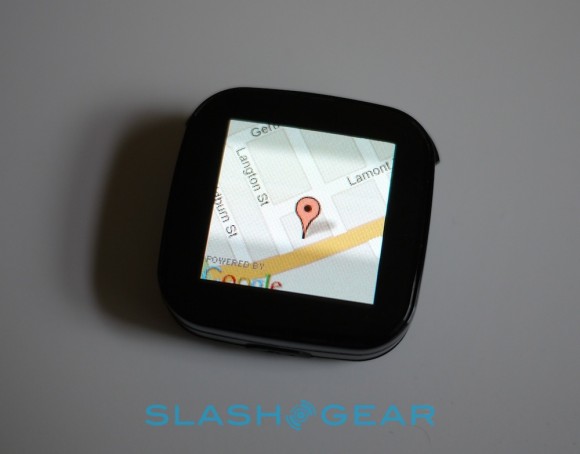 Much of the time was spent watching a clock icon that never disappeared, though by tapping the up and down controls – which steps through different levels of zoom – we did find two frames that had successfully made it over from Google Maps. Unfortunately it’s not a dynamically updating display, instead literally a snapshot of your current position, with no direction indicator. We’d like to have been able to pan around the surrounding area with the direction buttons, but that’s not possible either. Hopefully a developer will step in with a Google Maps Navigation plug-in that puts updating pedestrian directions onto the LiveView’s display.

Sony Ericsson reckon the LiveView’s non-replaceable battery is good for up to four days use, though we found that was overly ambitious. Instead, we managed almost two days of sporadic use, though it’s worth noting that on some occasions, when we tried to use the LiveView, it had dropped the Bluetooth connection and refused to reconnect; it’s not clear how much of the time was spent unconnected in this way. The problem is compounded by a flaky battery gauge, which for much of the time seemed to bear little relationship to how much use we subsequently got out of it. 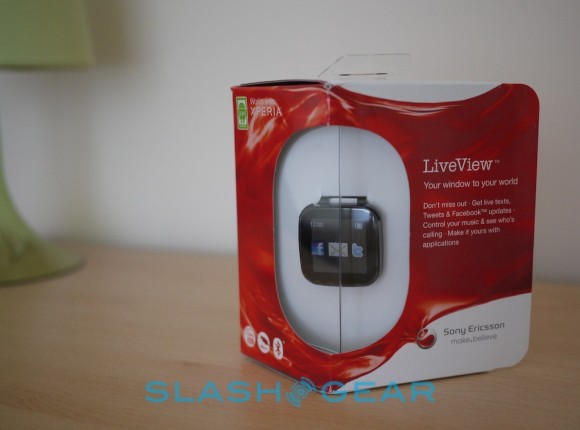 The concept behind the LiveView is brilliant: offsetting alerts and updates to a secondary screen, allowing you to keep on top of them without having to constantly pull out your phone. That demands consistency, however, and it’s there that the LiveView stumbles. We experienced far too many random disconnects or apparent crashes for comfort, and all too often had to resort to power-cycling Bluetooth on our phone in order to get the LiveView working again.

Sony Ericsson deserves credit for the concept and flexibility with a range of Android devices, and the price – at around what you’d pay for a mid-range Bluetooth headset – is considerably less than the company’s earlier Bluetooth watches. Unfortunately the day to day experience simply doesn’t live up to the promise.

Thanks to Clove for the loan of the Sony Ericsson LiveView. It’s available now, priced at £69.