As predicted earlier this week by Space officials and reported right here on SlashGear yesterday, the Sun’s newest solar storm has unleashed a lovely coronal mass ejection (CME) outward and towards the Earth, making impact throughout the day today. As was also expected, there appears to be no danger in the radiation storm, believe it or not, despite its terrifying name. What we are looking out for, instead, is a collection of auroras in the night sky – if it’s dark out where you live, look up!

NASA also confirmed that there was and is no danger for the astronauts currently aboard the International Space Station as we speak. The CME arrived on Earth at 1500 UT (10 am EST) according to Space Weather, and they’re letting us all know that this could be “a happy day” for aurora watchers everywhere. The chart you’re looking at below is registered at Lofoton, Norway, and shows the CME’s arrival in ground currents outside the laboratory of scientist Rob Stammes. 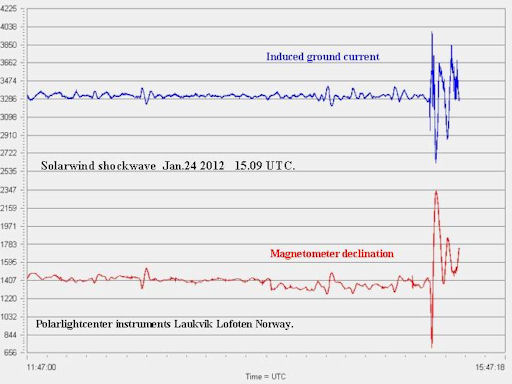 With this and other Sun-related events, we’d like to assure you that though we’re in no clear and present danger of any kind of destruction of the Earth, it will come someday. For the Sun is not a Mass of Incandescent Gas, it is a Miasma of Incandescent Plasma, and we invite you to take part in a learning exercise on the subject. To help us out, here’s They Might Be Giants with their smash hit: Why Does the Sun Really Shine? [This is an update to the original Why Does The Sun Shine? you might be familiar with if you were a fourth grader when their first Science album was released.]

The image at the head of this post comes from our same source, Space Weather, but was submitted by photographer Andy Keen and was taken at the very start of this storm on January 22nd, 2012, up in Northern Lapland, Finland.