If there’s one thing that Rio de Janeiro has been short of these past years, it’s a huge solar powered waterfall standing 105m above sea level.  In fact, you could argue that most places lack one, but architects RAFAA reckon Rio de Janeiro deserve the Solar City Tower for the 2016 Olympic Games.  The waterfall is actually the showier side of a solar power plant which, RAFAA reckon, would supply enough energy to help make the Games carbon-neutral.

In fact, they expect to produce more than enough power from the sunlight; the excess would be used to pump seawater into reservoirs at the top of the structure, which could then be emptied down through turbines at night and used to create even more electricity.  The eye-catching waterfall feature would only be for “special occasions”.

Meanwhile RAFAA expect to fill the building with balconies, places to eat and entertainment, as well as offering bungee jumping and a “glass sky walk” on the very top.  The chances of it actually being constructed seem, to our naive eyes, pretty slim, but it certainly outclasses that pebble bubble fountain you made out of an old water-butt. 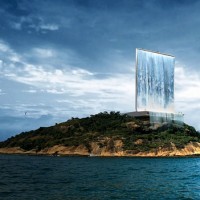