Researchers at MIT have created a robot with the ability to identify the objects it picks up – at least their dimensions – by touch. This robot is working at MIT’s Computer Science and Artificial Intelligence Laboratory (CSAIL) and utilizes a 3D-printed hand made with silicone rubber. Each of this robot’s three fingers has sensors that, working together, are able to estimate the size and shape of an object. This system is accurate enough to allow the robot to identify objects from a set.

In the CSAIL Distributed Robotics Lab, CSAIL Director Daniela Rus spoke up about the project, suggesting that it’s a real breakthrough in robotic intelligence. “Robots are often limited in what they can do because of how hard it is to interact with objects of different sizes and materials,” said Rus, “Grasping is an important step in being able to do useful tasks; with this work we set out to develop both the soft hands and the supporting control and planning systems that make dynamic grasping possible.”

This robot uses two kinds of grasps to pick up objects. One goes by the name “pinch grasp” – which picks up the object with the tips of the fingers of the robot’s hand. The other is an “enveloping grasp” – in which the object is entirely contained within the grip of the hand of the robot.

This project utilizes the Baxter manufacturing robot, replacing the default gripper hand. The standard hand crushes objects like soda pop cans, and is not able to pick up extremely thin objects like CDs or pieces of paper.

“If we want robots in human-centered environments, they need to be more adaptive and able to interact with objects whose shape and placement are not precisely known,” said Rus.

“Our dream is to develop a robot that, like a human, can approach an unknown object, big or small, determine its approximate shape and size, and figure out how to interface with it in one seamless motion.” 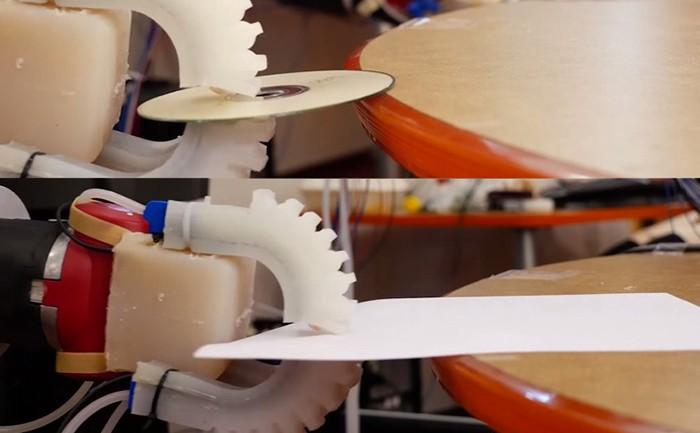 Graduate student Bianca Homberg, PhD candidate Robert Katzschmann, and postdoc Mehmet Dogar worked with Rus to write the scientific paper on the robot according to MIT. This team worked within the Distributed Robotics Laboratory at MIT with support from The Boeing Company and the National Science Foundation.