Edward Snowden has revealed this week that if it had not been for an impending election of Barack Obama in 2008 as President of the United States, he might have leaked NSA documents earlier. He speaks up this week on how he began to consider whistle-blowing in 2007, during “the Bush period, when the war on terror had gotten really dark.”

“We were torturing people; we had warrantless wiretapping,” said Snowden of his time working for the NSA. Snowden collected files which he would later leak to the news media during his time as an NSA contractor for Dell and Booz Allen Hamilton in and around the year 2013.

Snowden spoke with Wired this week about his roll in the CIA and the NSA, continuing on why he held off leaking information back in 2007-08. “I think even Obama’s critics were impressed and optimistic about the values that he represented,” said Snowden, “He said that we’re not going to sacrifice our rights. We’re not going to change who we are just to catch some small percentage more terrorists.”

Snowden worked inside the CIA up until 2010 when he joined Dell in Japan, contracted then for the NSA. “Not only did they not fulfill those promises,” said Snowden of the Obama administration, “but they entirely repudiated them.”

“They went in the other direction,” said Snowden, “hat does that mean for a society, for a democracy, when the people that you elect on the basis of promises can basically suborn the will of the electorate?” 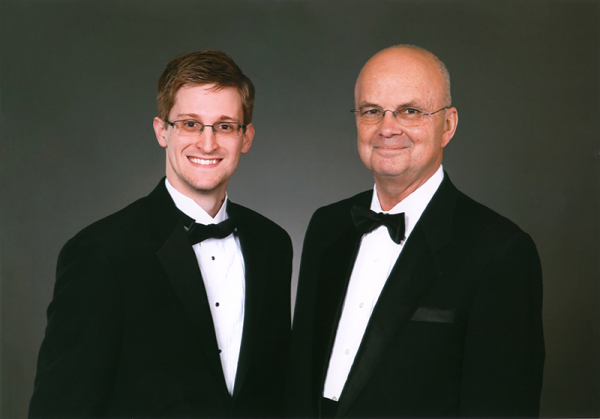 Above you’ll find a photo of Edward Snowden posing with General Michael Hayden, former director of the NSA and the CIA. This photo was taken at a gala in 2011.