Qualcomm’s relentless plan to put 5G in as many smartphones as possible continues today, with the Snapdragon 690 5G making its debut and promising more affordable options with support for high-speed wireless. The first of the 6-series to offer 5G, the new Snapdragon is expected to show up in phones from LG, Motorola, TCL, and Nokia, among others.

Clearly, this isn’t Qualcomm’s first ride on the 5G train. What it does, however, is distill some of the features we’ve previously seen on the Snapdragon 865 and Snapdragon 765, and bring them to a midrange market.

The devices themselves will, of course, be up to the individual phone-makers. Still, the Snapdragon 690 5G does have some promising abilities out of the gate. For a start, it’s a global 5G mobile platform – the Snapdragon X51 5G Modem-RF System, to be specific – with support for SA and NSA, along with FDD, TDD, and Dynamic Spectrum Sharing. It also boasts global multi-SIM support, though it’s a Sub-6 GHz modem rather than mmWave.

For displays, the Snapdragon 690 will see up to 60-percent faster graphics rendering courtesy of its Adreno 619L GPU. That supports up to FHD+ 120Hz on-device displays, and QHD 60Hz external displays, with both HDR10 and HDR10+ catered for.

The CPU is an octa-core Kryo 560, running at up to 2.0 GHz. Compared to the Snapdragon 675, Qualcomm says, you could see up to 20-percent more performance from it.

It’s around the camera where buyers may see the most impressive changes, mind. The Snapdragon 690 5G will support up to 4K HDR video capture at 30 fps, a first for the 6-series, as well as 4K HDR with portrait mode bokeh. For stills, there’s HDR Still and Super MP snapshot, with up to 192-megapixel sensors catered for. For slow-mo, there’s up to 270p at 240 fps, and the new Snapdragon can do multi-frame noise reduction with its Spectra 355L image signal processor. 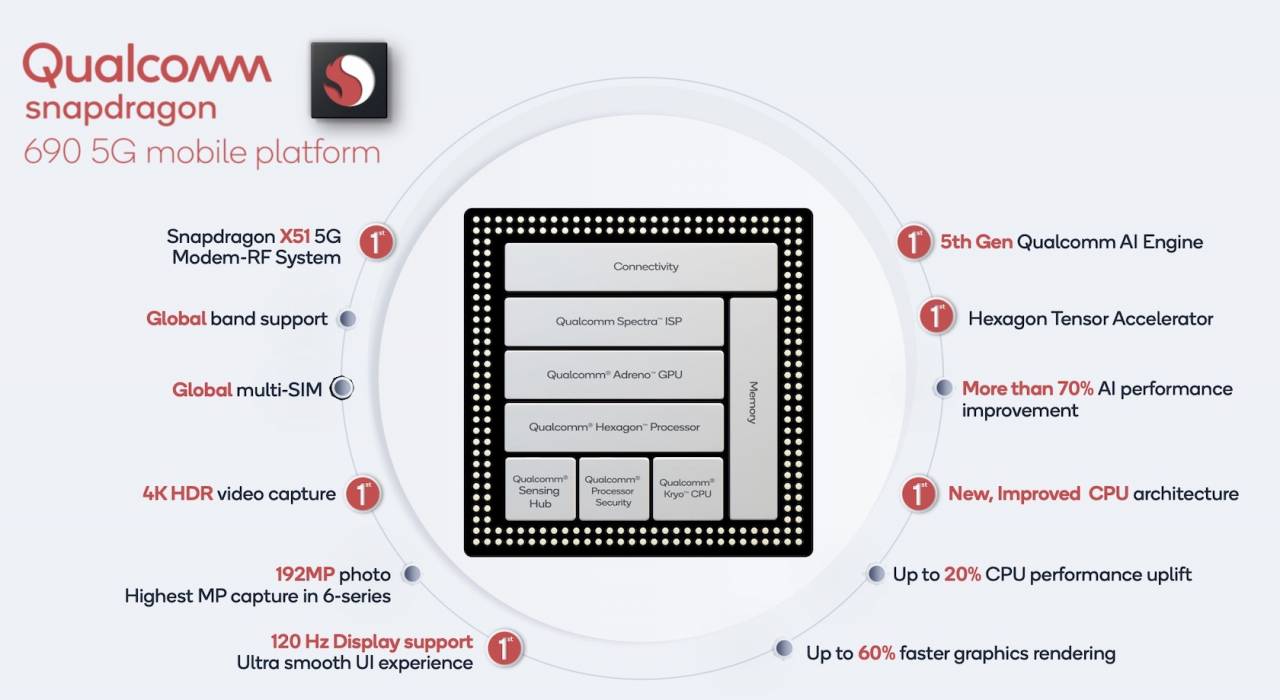 In addition to 5G there’s also WiFi 6 support, plus Bluetooth 5.1. The latter supports Qualcomm TrueWireless Technology alone with aptX Adaptive. The Hexagon 692 processor is included too, for things like wakeword triggering, along with the Qualcomm Sensing Hub. It’s the first time we’ve seen a Hexagon Tensor accelerator in the 6-series.

According to Qualcomm, the first Snapdragon 690 5G based devices should start appearing in stores in the second half of 2020. There’ll be phones for the US market too, the company insists, even if we’re still waiting for Snapdragon 765 phones to actually reach shelves here. That’ll happen imminently, Qualcomm promises, having been delayed somewhat by the current health situation.