Although wearable technology has been around ever since the advent of fitness trackers, it wasn’t until smartwatches came along that it was treated as a distinct category of its own, worthy of being analyzed by market intelligence companies. Even then, smartwatches were still considered a relative minority despite having dozens of models available, including the highly popular Apple Watch. The tides of change, however, are turning, and smartwatches are starting to outnumber simpler trackers in terms of shipments. Amusingly enough, neither are the top-selling “wearables” as far as last quarter is concerned.

Wearables is a pretty generic term now that the market has grown to include quite a few new device categories. Almost any tech you can wear would qualify, though some perhaps have visions of hi-tech fashion as the predominant example of wearable technology. Smart jackets and smart clothing, however, haven’t exactly caught on yet, so we’ll have to settle for accessories you put on your wrists and in your ears for now.

Market analyst IDC has included what it calls “hearables” in this category, referring to a group of products that encompasses earbuds and earphones, most of them using wireless Bluetooth connections. Although the name might be new, their strength in numbers isn’t to be underestimated. They might, in fact, be credited for growing the wearable market by 9.9% in Q3 2021 compared to the same period last year, with hearables taking 64.7% of that market. 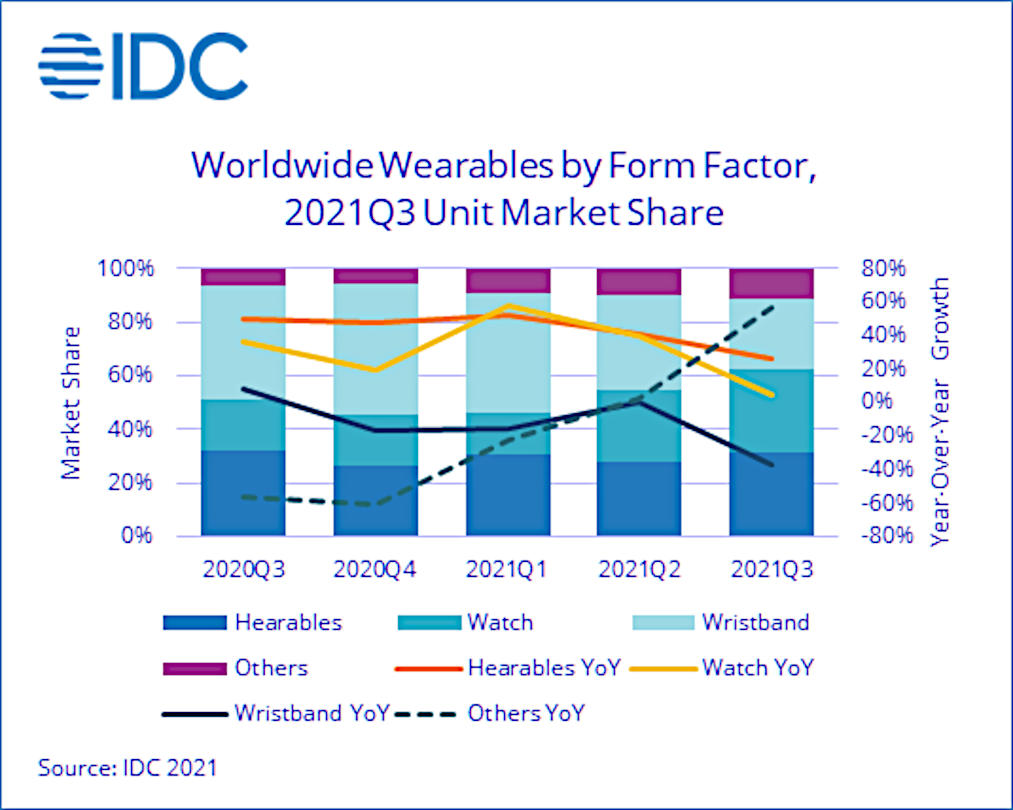 There is also a shift happening in wrist-worn wearables like smartwatches and fitness trackers. IDC says that the demand is shifting away from wristbands as consumers start to look for more feature-rich wearables. Amusingly, the market analysis company credits niche smartwatches like kids’ watches and exercise watches as having the greatest pull in the last quarter.

There is also an upset when it comes to the top five players in the smartwatch market, with Xiaomi being dethroned by Samsung as the world’s second-largest wearable company, even though the figures are tied. The combination of the Galaxy Watch 4 and Wear OS proved to be very advantageous for both Samsung as well as Google. Xiaomi’s reliance on fitness bands, on the other hand, became its liability this time around.

Smartwatches aren’t immune to the effects of the global supply shortage, however, which explains the decline in shipments year over year. IDC predicts that things will pick up once sales of the Apple Watch Series 7 go into full gear and with more watches running Wear OS 3 launch next year.