This week in science, we know that computers can drive us crazy at times, but can a computer actually be made insane itself? Apparently so. We have a schizophrenic computer that may actually help us understand the disease in humans. Plus, a couple of other crazy ideas: robotic cat ears controlled by brainwaves, and a DIY stylus for operating your smartphone (or other touchscreen device) with your nose. We also have space news, a new way to use wind power, and a healthy dose of robots. Continue past the cut for all the science goodies.

One of the theories on schizophrenia is that people suffering from the disorder cannot forget or ignore as much stimuli as they should, and that makes it harder for them to process everything coming their way. They lose connections between stories, and cannot distinguish between reality and illusion. We know that dopamine plays a role in this process of differentiating experiences. Well, scientists at the University of Texas-Austin have been experimenting with causing schizophrenia-like symptoms in a neural network, called DISCERN.

DISCERN is able to learn natural language, and has been taught a series of simple stories, and stores information as relationships between words and sentences. Then the scientists told the computer to “forget less”, so that it had to pay attention to every detail of information. The computer began making ridiculous claims, and raving about being responsible for a terrorist bombing. “DISCERN began putting itself at the center of fantastical, delusional stories that incorporated elements from other stories it had been told to recall,” according to a news release from the University. The scientists at UT hope that the experiments with driving the neural network crazy can help with research in humans. 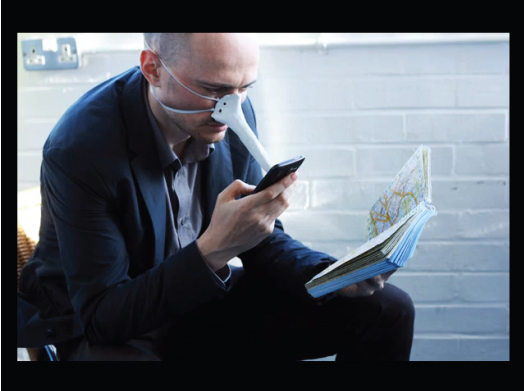 Ok, this one just creeps me out. Something about this giant strap-on nose that looks like a cross between a hairy snout and a proboscis is just way too weird. Couple that with the footage of the guy sitting in the bathtub using it, and yeah, I’m thoroughly creeped out. It is an interesting idea, though, to be able to use your touchscreen gadgets hands-free. The thing is made out of plaster with a capacitive stylus embedded in it, because you can’t touch a touchscreen with just anything, it has to have an electrical charge, like our skin. He even made the plaster with embedded fibers so it looks a little bit hairy (why? why???). I have swapped out the picture of the guy in the bathtub with this one. You’re welcome. But you can still see him in the tub in the video, plus seeing how the apparatus works, which it seems to pretty well. I guess it takes practice though. 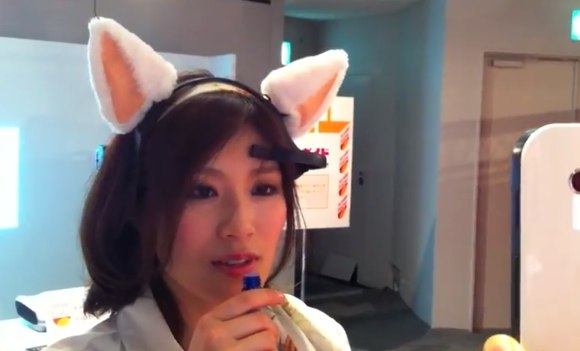 Now here is an attachable apparatus that is not at all creepy. The handiwork of Neurowear, the Necomimi straps a couple of motorized furry cat ears to a brainwave-monitoring headband, so that you can wiggle them appropriately. When you’re active and attentive, the ears perk up; when you’re feeling tired and sluggish, they lie flat. Get enthusiastic – and, frankly, who wouldn’t be permanently enthusiastic wearing a set of robotic cat ears? – and they wiggle and twitch. It’s seemingly controlled by an Android app running a Samsung Galaxy Tab. According to Neurowear, “Necomimi is the new communication tool that augments [a] human’s body and ability” and is the first step in better communicating how we’re feeling and reacting to the world beyond words and facial expressions. These are really cute. I could see them doing very well with young girls. I know my 5 year old would love them! See the promotional video below.

A more efficient way to use wind power 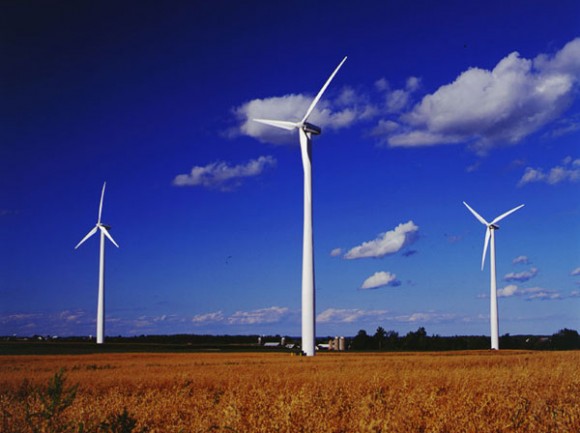 Wind power has its proponents. It seems like a great idea: it’s clean, it collects energy from something that occurs naturally. But it really isn’t very efficient. According to industry trade body RenewableUK, the average wind turbine only generates 20 to 30 percent of its maximum output in a year. And this may be too optimistic. The John Muir Trust published a report recently showing that 2010 wind output was only at 10 percent of capacity a third of the time. Not good.

But one potential solution is compressed air energy storage (CAES). It works like this: when the wind blows, turbines are used to compress air, which is stored in pressure vessels. In times of high demand, pressurized air is released and powers a generator, in essence, the wind power is saved until it is needed, making it more consistent. This is not a new concept, but until recently, the heat lost during compression made the process inefficient. This is being improved, though, and CAES is looking more promising.

Well, while NASA can’t get the final space shuttle mission off the ground, private spaceflight seems to be showing more promise. Virginia-based Space Adventures announced on Thursday that it will add another seat to a Soyuz spacecraft that will be launching into low-Earth orbit by 2015. The space travelers will ride in comfort in “habitation modules”. The Soyuz TMA lunar complex will be able to take people with an extra $150 million laying around to the moon. Space Adventures is working with Boeing to build spacecraft, and is financed in part by a $50 million grant from NASA, which was part of the stimulus package (believe it or not).

Meanwhile, Virgin Galactic has come up with an innovative way to accomplish re-entry into the atmosphere from space. This phase of space flight has always been the most dangerous and technically challenging. What I like about the solution Virgin has found is that it’s simple. Once the spaceship enters the atmosphere, the tail structure of the spaceship can be rotated upwards to a 65 degree angle. This is called a “feathered” configuration, and positions the fuselage parallel to the horizon, creating very high drag as the spaceship descends. This configuration is very stable, and relys on physics instead of a complicated fly-by-wire system. The spaceship is made of lightweight materials, so the combination of high drag and low weight means that the skin temperature stays very low compared to previous spacecraft. This elimates the need for heat shields and tiles, which have been such a problem on the Space Shuttle. Once the craft reaches around 70,000 feet, the feather lowers back to its original configuration and the spaceship simply glides back to the runway.

Private spaceflight, while right now reserved only for the super-rich, will likely one day become more accessible as innovations and better technology come into play. Our solar system may become a vacation destination in the next century. 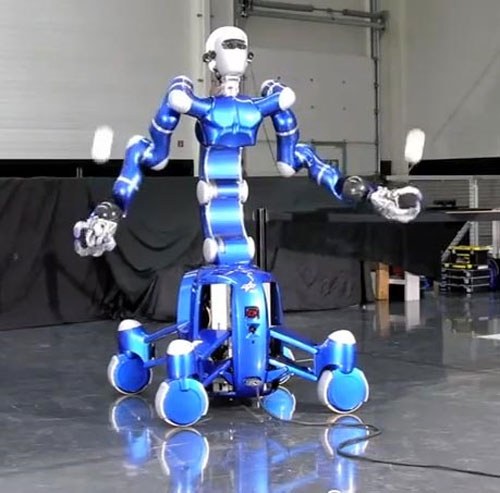 The German Aerospace Agency, DLR, has developed a robot with remarkable agility, called Rollin’ Justin. He is controlled with an iPad interface. Justin can catch a ball thrown at it with 80% accuracy (probably better than I can!). This robot uses sensors to detect the flight path of the ball thrown at it, and move its hands within 2cm of the predicted flight path. The hand can move to the predicted spot in only five milliseconds. He can even catch two balls at once. In the video below, Rollin’ Justin also makes a cup of coffee. Our own Shane McGlaun says, “Once it can clean toilets and wash dishes I am buying one.” I agree! Maybe he could make my kids breakfast when I want to sleep in. If you can make coffee, you can make a bowl of cereal, or butter some toast right?