SlashGear 101: What is Chromecast?

Google’s Chromecast device is a Web media player, introduced by the company just a bit over a year after they first showed of a machine with very similar capabilities: the Nexus Q. Where the Nexus Q came into play as a bocce-ball-sized TV “box”, Chromecast is the size of a USB dongle, small enough to fit in your pocket. It connects through a television’s full-sized HDMI port and you’ll be able to pull it up with the input button on your television remote, the same as you would a DVD player.

Instead of playing physical content, like DVDs or Blu-ray disks, Chromecast uses the internet to pull content from web-based apps. Chromecast does not have a remote control included in the box it’s delivered with when you buy it because it’s able to connect with basically any smart device you’ve got in your home – or in your pocket.

You’ll plug Chromecast in to your TV, plug a microUSB power cord (included in the box) into Chromecast to keep it powered up, and press the single physical button on Chromecast to send out a wireless signal that effectively says, “I’m ready to go!” 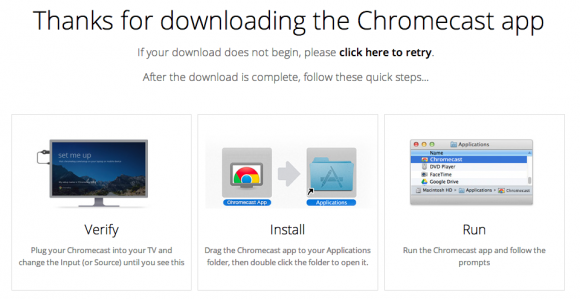 Turning the television on and the input to the HDMI port you’ve plugged Chromecast into, you’ll see a screen that directs you to google.com/chromecast/setup. Note that this URL may change over time, but this is the first place you’ll be sent in this initial launch of Chromecast when this article is first posted.

This one-time setup connects Chromecast to the web – if you’ve got a password on your Wi-Fi network, you’ll need to enter it. You can do this setup process from any device with an internet browser, while actually sending content to Chromecast is limited to the following:

At the moment you’ll be able to use Chromecast to connect with Netflix, YouTube, Google Play Movies, and Google Music. Using Chromecast’s “Cast” protocol, you’re able to “fling” content from your control device (laptop, smartphone, tablet) to your TV.

So you’ll open up YouTube, for example, and play a video, but you’ll also be clicking the Cast button that, (once you’re set up), appears in the upper right-hand corner of your Chrome web browser or app. From there you’ll be able to control said media as it plays OR continue on with your regularly scheduled web browsing as the media plays on your TV.

Once the media you’ve chosen on your phone, tablet, or notebook has been flung to Chromecast, you no longer have to worry about it. If you DO want to control it again, you’ll have only to return to the app you were in and change it up. You can also choose to send something new to Chromecast, this immediately stopping the current media from playing, moving on to the next piece of media in kind.

There are also interesting side-loading features you can use if you’re not all about working with one of the few apps supported by Chromecast so far. At the moment Chromecast has a BETA mirroring feature that works with Chrome web browser windows.

You can open a file in a Chrome web browser window and fling it to Chromecast, your television then mirroring this window as you do so. This feature requires that you actually keep the window open if you want to keep watching it on your TV since the content is not on the web, it’s on your computer.

This BETA mirroring feature can be used for photos and video as well – we’ll be seeing how close we can get to real web-based gaming mirroring soon!

What else do you want to know about Chromecast? Is this a device (at $35 USD) that you’ll be picking up, supposing it’s not already sold out every which way from physical stores to Google Play? Let us know!