This week at NVIDIA’s own GPU Technology Conference 2013, we’ve been introduced to no less than the company’s first end-to-end system: NVIDIA GRID VCA. The VCA part of the name stands for “Visual Computing Appliance”, and it’s part of the greater NVIDIA GRID family we were re-introduced to at CES 2013 earlier this year. This VCA is NVIDIA’s way of addressing those users – and SMBs (small-to-medium businesses) – out there that want a single web-accessible database without a massive rack of servers.

What is the NVIDIA GRID VCA?

The NVIDIA GRID VCA is a Visual Computing Appliance. In it’s current state, you’ll be working with a massive amount of graphics computing power no matter where you are, accessing this remote system over the web. As NVIDIA CEO Jen-Hsun Huang noted on-stage at GTC 2013, “It’s as if you have your own personal PC under your desk” – but you’re in a completely different room. 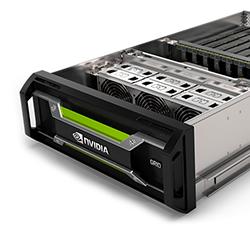 You’re wireless, you’re in a completely different state – NVIDIA GRID VCA is basically whatever you need it to be. The first iteration of the NVIDIA GRID VCA will be packed as follows:

You’ll be able to work with the NVIDIA GRID VCA system with basically any kind of computer, be it a Mac, a PC, mobile devices with Android, ARM or x86-toting machines, anything. With the NVIDIA GRID VCA, your remotely-hosted workspace shows up wherever you need it to. Each device you’ve got simply needs to download and run a single client going by the name “GRID client.” Imagine that.

If you’ve got a company using NVIDIA’s GRID, you’ll have access to mega-powerful computing on whatever machine you’ve got connected to it. One of the use-cases spoken about at GTC 2013 was some advanced video editing on-the-go.

On-stage with NVIDIA’s CEO Jen-Hsun Huang spoke James Fox, CEO of the group Dawnrunner. As a film and video production company (based in San Francisco, if you’d like to know), workers at Dawnrunner use Adobe software and Autodesk. As Fox notes, “Earth Shattering is what gets talked about in the office.” 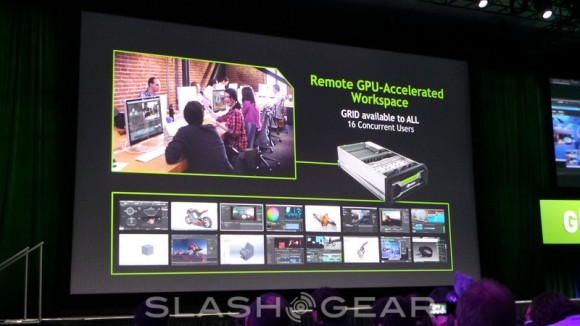 Fox and his compatriots use their own GRID configuration to process video, head out to a remote spot and show a customer, and change the video on the spot if the customer does so wish it. While processing video of the monster sizes Dawnrunner works with, still needs relatively large computing power – “Hollywood big” we could call it – NVIDIA’s GRID can make it happen inside the NVIDIA GRID VCA.

With the processing going on inside the VCA and shown on a remote workstation environment (basically a real-time window into the GRID), you could potentially show real-time Hollywood movie-sized video editing from your Android phone. In that one image of a situation you’ve got the power of this new ecosystem.

Of course no big claim with the word “Hollywood” in it is complete without some big-name movie examples to go with it. At GTC 2013, NVIDIA’s CEO Jen-Hsun Huang brought both Josh Trank and Jules Urbach onstage. The former is the director of the upcoming re-boot (2015) movie The Fantastic Four (yes, that Fantastic Four), and the latter is the founder and CEO of the company known as Otoy.

Both men speak of the power of GPUs, Trank speaking first about how people like he, the movie director, use CGI from the beginning of the creation of a film with pre-visualization to bid it out to studios, getting funding before there is any cash to be had. Meanwhile Urbach spoke of how CGI like this can be rendered 40-100 times faster with GPUs than CPUs – and with that speed you’ve got a lot less energy spent and far fewer hours used for a final product. 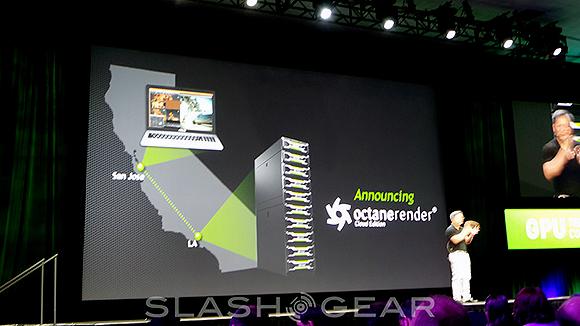 With that, Urbach showed Otoy’s Octane Render (not brand new as of today, but made ultra-powerful with NVIDIA GRID backing it up). This system exists on your computer as a tiny app and connects your computer to a remote workstation – that’s where NVIDIA’s GRID comes in – and you’ll be able to work with massive amounts of power wherever you go. 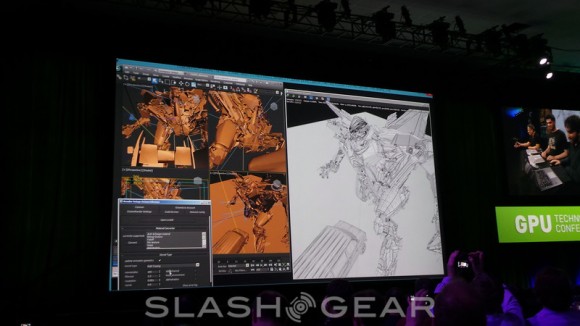 Octane Render allows you to use “hundreds or thousands” of GPUs to be used by renderers in the cloud. Shown on-stage was a pre-visualization of a scene from the original Transformers movies (which Otoy helped create), streamed in real time over the web from Los Angeles to the location of the conference: San Jose.

What they showed, it was made clear, is that the power of GPUs in this context cannot be denied. With the power of 112 GPUs at once, it was shown that a high-powered Hollywood-big scene could be rendered in a second where in the past it would have taken several hours. And here, once again, it can all be controlled remotely.

There are two main configurations at the moment for NVIDIA’s GRID VCA, the first working with 8 GPU units, 32GB of GPU Memory, 192 GB System Memory, 16 thread CPU, and up to 8 concurrent users. The second is as follows – and this is the beast: 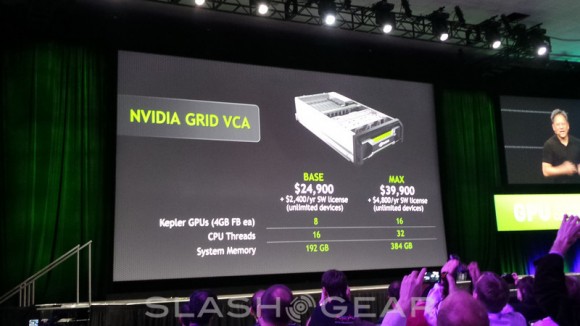 Sound like the pocket-change salvation you’ve been waiting for? Let us know if your SMB will be busting out with the NVIDIA GRID VCA immediately if not soon, and be sure to let us know how it goes, too!