Skylake could be Intel’s best chip generation yet

We’ve speculated before that Microsoft might be delaying a Surface Pro 4 tablet on two grounds. First is due to the appearance of a new Core i7 Surface Pro 3 configuration that seats somewhere in between the older Core i5 and Core i7 models. But the second reason, and probably the basis of the first, is that Microsoft could be trying to sync with Intel‘s rhythm, waiting for the chip maker to fully launch the next gen Skylake before making a move. Based on some leaked slides, that might be a smart decision after all.

The successor to Intel’s Broadwell, Skylake is the “tock” in Intel’s “tick-tock” cadence. This means that Skylake will still use the same 14nm manufacturing process as Broadwell but also heralds the shifting of architectures, paving the way for Canonlake and its 10nm process next year. Despite being somewhat a middle ground, Skylake might prove to be Intel’s biggest best in the computing industry, particularly in mobile.

Traditionally, Intel’s chips haven’t exactly been the go to for mobile devices, which partly explains the disproportionately small number of Intel-powered smartphones and tablets compared to ARM-based ones. That said, the world’s biggest chip maker has been making strides, trying to overcome its weak points. And based on its slides, Skylake might be the hero that brings Intel to the forefront in mobile.

When it comes to raw performance, for example, Skylake processors are expected to perform 10 to 17 percent faster than Broadwell chips. But, at the same time, they are promised to last longer on battery too, from 8.5 hours to 11.3 hours or 1.4 times more. Intel is also gaining momentum on the mobile graphics front with 16 percent all up to a staggering 41 percent increase in performance, depending on which chip series you compared it with. All in all, Skylake represents not a simple incremental step up but a huge jump. 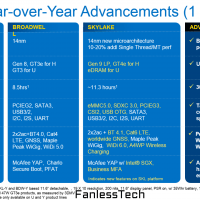 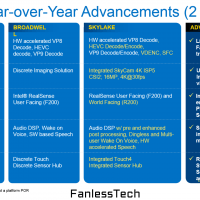 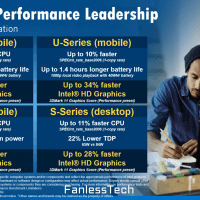 Of course, this is all Intel marketing figures, and the true test will be when the chip does come out on devices. Skylake is expected to come sometimes later this second half of 2015.