It’s that time of the year again – time for the Simpsons’ Treehouse of Horror – a mini-episode-laden tribute to Halloween that’s been going on for 14 straight years. What we’ve got this time around (for the “Couch Gag” intro to the show, at least) is a massive three-minute-long homage to the horror genre of films as directed by none other than Guillermo del Toro. This beast of sequence has well over 45 references to both the horror genre in general and the films of del Toro himself – and we’re going to list them.

The director of odd movies galore spoke with USA Today on the sequence, making it clear how he and the Simpsons’ creative department came to the conclusions they did. “We talked about doing it around the movies I have done, but I felt I’d rather mix those images with the creatures and monsters of film, which have influenced me enormously,” del Toro said, “I ended up cramming in about 1/50th of what I wanted.”

In order (for the most part), you’ll find this sequence starting with a three-eyed raven – while this could possibly be a reference to Game of Thrones, it’s more likely just a riff on the ever-present three-eyed Simpsons fish “Blinky”. From there you’ve got a zombie movie reference that could just as easily be World War Z as it could be Land of the Dead (or Resident Evil: Apocalypse). Taking a quick look at The Nerdist’s list we can see quite a few tips – which we’ve simplified here:

1. Three-eyed raven.
2. Zombies.
3. Jaeger fighting a Kaiju from Pacific Rim.
4. Chief Wiggum as the Cyclops is a reference to The 7th Voyage of Sinbad.
5. Alfred Hitchcock throws birdseed on Ms. Krabappel [The Birds].
6. Bart writes the famous line from The Shining on the blackboard.
7. Stephen King.
8. Groundskeeper Willie is Hellboy fighting Kroenen.
9. Homer turns into a Reaper from Blade II.
10. Carl turns into Blade.
11. Godzilla’s skeleton is buried underground.

12. Mr. Burns is the Pale Man and Smithers is a fairy from Pan’s Labyrinth.
13. Maggie is on the conveyor belt with the vampire devices from Cronos.
14. Bunch of references to Mimic, or possibly Naked Lunch but I think it’s the first one.

14b. Also possible references to The Body Snatchers with the pods growing on the ceiling of the grocery store – and Lisa rings up to $666, of course.

16b. Lisa Simpson with tentacles, referencing the Aliens appearance from past Treehouse of Horror episodes. Shakespear Skull from Hamlet. There’s also an Island of Dr Moreau painting and a Raven painting. The pumpkin painting could be anything from the Headless Horseman to the Sinister Squashling from World of Warcraft to the Great Pumpkin from Peanuts.

17. Cthulu
18. On the sidewalk there are H.P. Lovecraft, Edgar Allan Poe, Ray Bradbury, The Illustrated Man, Richard Matheson, and a light-sensitive mutant from The Omega Man.
19. Frankenstein, Dracula, The Wolf Man, The Mummy, The Mutant from This Island Earth in the background, *Creature from the Black Lagoon, Bride of Frankenstein, The Invisible Man).
20. The Car *(murdering Millhouse, who gets eaten by Blinky).
21. Rod Serling.
22. The Robot from Lost in Space
23. A weird green tentacle thing *(Plant Elemental from Hellboy 2)
24. The Xenomorph from Alien
25. Something spray painting “El Muerto.”

26. Graffiti of Hitchcock’s silhouette
27. Lon Chaney in London After Midnight
28. Skeletons from Jason and the Argonauts
29. Kang and Kodos way in the back
30. A Morlock from The Time Machine
31. The stupid creature from Robot Monster
32. Nosferatu
33. I think another Harryhausen creature (the lizard guy) *see 25c
34. The Saucer Men from Invasion of the Saucer Men
35. The Fly
36. Gort and the ship from The Day the Earth Stood Still
37. I don’t know who that green guy in the foreground is
38. A couple of Freaks from Tod Browning’s Freaks (Pinhead, Half-man)
39. The Mummy
40. The Invisible Man
41. Rondo Hatton
42. The Grim Reaper
43. At the sofa, Homer is the kid from The Devil’s Backbone *(Santi)
44. Lisa falls through the couch and is all Alice in Wonderland-y
45. HYPNOTOAD!
46. Pan’s Labyrinth. 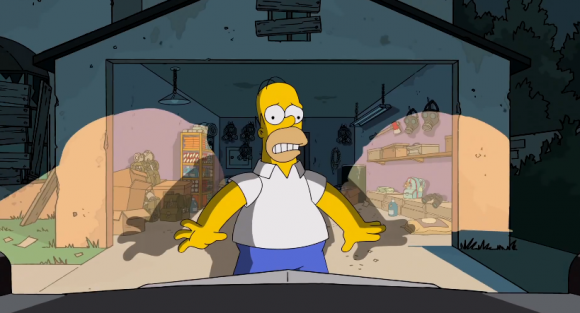 If you happen to find any more bits or pieces here, please feel free to let us know! We’ve heard tips of oddities like Hellraiser’s Pinhead appearing here too, but it may be an in-show reference instead. We’ll just have to wait and see! This Treehouse of Horror will show up for the first time this Sunday night!