Signal iPhone app keeps eavesdroppers out of your calls

If you’ve ever gotten that eerie feeling that someone might be snooping in on your calls, then this app might just be the right fit for you. Open WhisperSystems has just made available their open source Signal app for iPhone that will encrypt your voice calls so that no one can eavesdrop. It won’t even cost you a single cent.

The Snowden scandal that rocked not just the US but the whole world as well has left some people wondering about the true extent of government agencies’ powers. They might even question the cooperation, complacency, or ignorance of tech companies in these incidents of spying. This has given rise to new devices and services, like Silent Circle’s BlackPhone, that try to assuage the fears and concerns of privacy-minded mobile device users. Open WhisperSystem is one of those and its new Signal app tries to do the same, except for voice calls and for the iPhone only.

Signal is notable because it is free, not just in price but also in nature. While most encryption services require you to cough up a monthly fee to keep your lines and your data safe, Signal charges nothing. It is also free software, also known by the more popular name of open source software. The implication of this is that programmers are free to audit Signal’s source code to really check that no government-enforced backdoor exists. Of course, they are also free to take the software and expand it or use it as the base for their own apps.

Despite it’s rather serious functionality, Signal is advertised to be dead simple to use. It uses your own existing phone number so there is no need for other logins, passwords, and other pieces of information that can be used to compromise your privacy. It uses push notification on the iPhone so that it doesn’t drain the battery when installed. And it employs a protocol called ZRTP that is used for secure real-time sessions for VoIP. 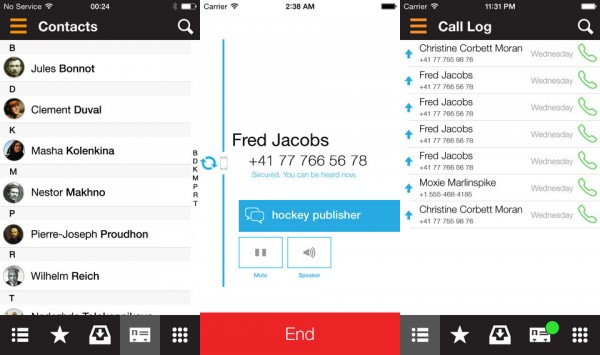 This isn’t yet the endgame for Open WhisperSystems. It plans to add secure text messaging to the iPhone app later this summer. And for Android users who already enjoy the RedPhone encrypted voice call app and TextSecure encrypted messaging app, the two will soon be merged into a single Signal app in order to consolidate the branding and whittle everything down to a single app.