Should you buy Skyrim on Nintendo Switch?

One of the biggest Nintendo Switch surprises came in the form of a game that most people will be familiar with: Skyrim. From the very start, Nintendo has been advertising Skyrim on the Switch, and for good reason, as this is the first time we’ve seen Bethesda’s epic open-world Elder Scrolls series come to Nintendo consoles. As exciting as it may be, Skyrim has been available on various platforms for six years now, and many gamers have already seen what its frozen landscape has to offer. With that in mind, is Skyrim worth purchasing again just because it’s now available on the Switch?

Before we really dive in, let’s just get this out of the way first: if you’ve never played Skyrim, you enjoy RPGs, and you own a Switch, you should absolutely buy it. For seasoned RPG veterans, Skyrim has lost some of its luster over the past few years, but for those who have yet to see what it has to offer, it’s definitely worth a purchase. Any RPG fan should play an Elder Scrolls game at some point, and Skyrim is arguably as good as any of them.

But what if you’ve played Skyrim to death already? That’s the camp I fall into. Between PC, Xbox 360, and PS3 (yes, really – all three platforms), my time playing Skyrim totals somewhere in the multiple hundreds of hours. I’ve clocked 300 hours on PC alone, thanks in large part to a healthy mod scene that allows me to make each playthrough vastly different. In short, Skyrim is one of my favorite games of all time, as many Bethesda games eventually become.

On the other side of the coin, there’s a certain level of burnout that comes along with those almost obsessive Skyrim hot streaks that can last for weeks. I’ve seen the opening hours of Skyrim so many times that I’ve come to loathe them. At this point, I think I could put down Skyrim forever and be satisfied with the time I’ve spent with it.

It kind of took me by surprise, then, that I’ve been so eager to play Skyrim on Switch since downloading it a week ago. Make no mistake, this is vanilla Skyrim in all of its glory, so there’s nothing particularly special about it, save for the portability factor. As it turns out, that’s a bigger draw than I thought it would be.

The novelty of being able to play Skyrim whenever I happen to have my Switch on me is great. I don’t need to be tethered to my TV or my desk to continue my dragon-slaying adventures. I can be in bed, I can be traveling, or I can be in places decent people are uncomfortable talking about, and I’ve got Skyrim ready to go.

That is very cool, and I don’t know when that novelty is going to fizzle out, but it hasn’t yet. If anything, it’s helped me push through the opening hours I’m so tired of and get to the meat of the game, where you start to figure out your character and things begin to take off. For whatever it’s worth, that novelty has pushed me waist deep back into Skyrim, and I’m excited to keep playing. 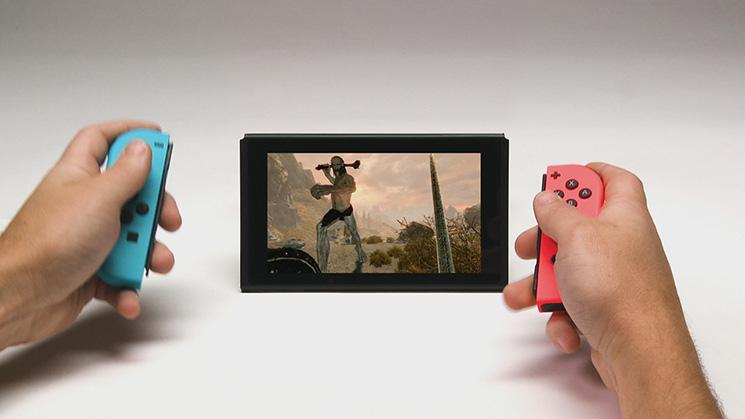 If you’ve played Skyrim on consoles and the portability factor gets you excited to dive back in, then it’s definitely worth buying on the Switch. When held up against the PC, Xbox One, and PS4 releases, this will easily be the worst-looking version of Skyrim, but honestly, graphics fidelity shouldn’t be the reason you buy it. The game is six years old after all, so of course it’s going to be lackluster in the graphics department (nevermind the fact that it was a little underwhelming when it was brand new).

For those who’ve done most of their Skyrim adventuring on PC, making a positive recommendation isn’t quite as easy. After years of modding the ever-loving crap out of Skyrim (which is basically your duty as a PC player), it’s certainly somewhat jarring to return to vanilla Skyrim. Though this has all of the DLC Bethesda released for the game, there still isn’t a whole lot here for those who have spent the past six years modding Skyrim into their ideal game.

The new features in the Switch version are neat, but they aren’t game changing in any sense. Amiibo support is cool, and the ability to get Legend of Zelda-themed items by scanning one of the many Zelda amiibo is a nice little call out to the series. You can scan any amiibo figure you own once a day and receive a chest with (seemingly) leveled loot, so if you have a decent collection, scanning Amiibo could definitely give you a leg up when it comes to outfitting your hero in gear and growing your coin purse. They’ll offer a nice jump start for anyone who has already played Skyrim before, but beyond that, Amiibo support is just a little bonus that you can survive without. 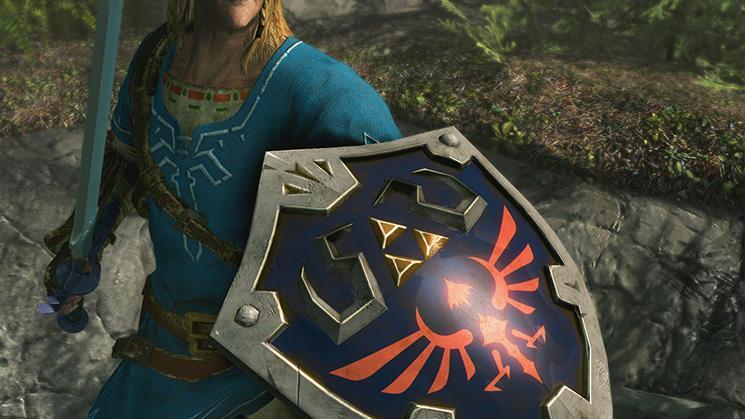 Motion controls, on the other hand, aren’t anything worth getting excited about. I’m sure there are a few people out there who will really get into them, but to me, they feel worse in every way to traditional controls. This could very well be down to the fact that I simply don’t like motion controls, but regardless, they shouldn’t be a deciding factor in whether or not you play the game.

Portability is the biggest thing going for Skyrim on Switch. It’s great – really great – and I think it brings a fresh angle to a game that so many of us are already very familiar with. If the prospect of Skyrim on the go gets you just as excited as it got me, or if you’re far enough out from your last playthrough that you’re beginning to get that itch again, then Skyrim on Switch is worth diving into.

For everyone else – the people who are burned out entirely on Skyrim at this point or the players who have so many mods on their PC that it’s a wonder the game runs without crashing – I’d say Skyrim is still worth considering, but maybe after it goes on sale at some point down the road. Skyrim is great, but $60 is likely going to be too much for those who have had their fill elsewhere.