As you might well know, it’s not often that we review a single app for a mobile device here on SlashGear – not unless its so massive, so awesome, so significant that it cannot be ignored. That’s what we’ve got right here, folks, a third-person shooter by the name of Shadowgun, made by Madfinger games for iOS and Android – today the news being the optimized version for the Android-based NVIDIA Tegra 2 dual-core processor. We’ve checked the game out on the Galaxy Tab 10.1 and it’s time to show you the next plateau for immersive mobile gaming.

UPDATE: the final release version of this game is out now, check out our follow-up post and hands-on video once you get down reading about it here, then pick the game up in the market!

A third-person shooter is, for those of you that don’t know, a game in which you’re looking over the shoulder of the character that you control, using your controls to then fire all manner of projectile weapons (or in some cases, cutting weapons or even your fists,) at your enemy. Here we’re using our fists to jam on computer consoles to pass through doors and open locks while our trigger finger blasts enemies with nothing less than an Alien caliber pulse rifle-esque supergun. Our enemies are a set of mutated humanoids and their robot counterparts – without getting too much into the story, basically they’re all freakish and you wont have any trouble with your conscience for blasting them into pieces. 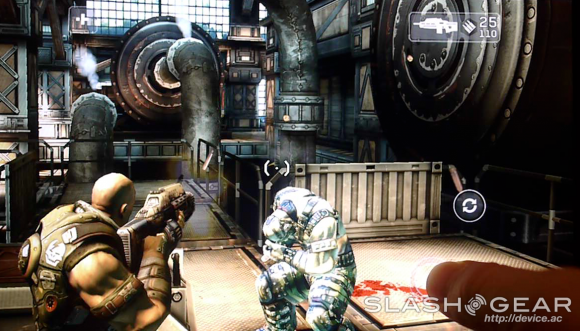 There IS a storyline, and you can read it in the hands-on video here if you please, and there IS a reason you’re on this planet with its industrial used-future look and hallways full of nasty customers, but heck, you know why you’re here. Your controls are simple and well-placed, this especially so since you can control where they sit. You’ve got your joystick, gun trigger, view and aim, reload gun button, gun switcher, and settings. Everything else you see there on the gray line below is a result of the Galaxy Tab 10.1 pushing its TouchWiz UX up in our face – forget it’s there for now. 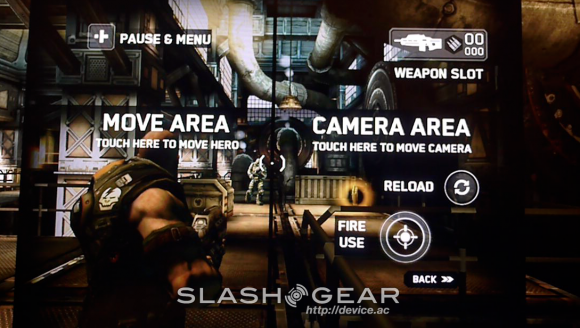 You can move all of your controls around and indeed even the wherever-you-need-it joystick for moving your character can be set in one place if you want it. The game is single player, contains what Madfinger says is 5 hours of play, and contains multiple outcomes at the end depending on how you’ve played your cards. The game ISNT easy for a beginner, and there are three difficulty settings for even the most hardened of shooter-game experts.

You’ll be able to find this game in the Tegra Zone as well as on the Android Market immediately if not soon, just search for that unique word: SHADOWGUN. It’s the only one in there, I assure you. This version is optimized, again, for the NVIDIA Tegra 2 dual-core chipset, and there WILL be an updated version for the quad-core Kal-El NVIDIA chipset come this winter. Exciting!