Mix a dictaphone with a connected Post-It note, add voice-to-text transcription, and you get Senstone, the latest “AI” equipped gadget aiming to corral your moments of genius. Launching on Kickstarter today, the discreet pendant promises not only a simple way to capture voice recordings, but transcribe and organize them on your iPhone, too. I’ve been trying a prototype Senstone over the past week; read on for some first impressions.

Senstone itself is a vaguely teardrop-shaped chunk of metal and glass roughly the size of a large coin. On the edge there’s a button to control power and which, with this early firmware, also triggers a recording. In time, Senstone tells me, you’ll be able to do that by tapping the front of the device (polycarbonate on this prototype, but scratch-resistant glass on final units) or, while it’s charging on its dock, by clicking your fingers nearby. 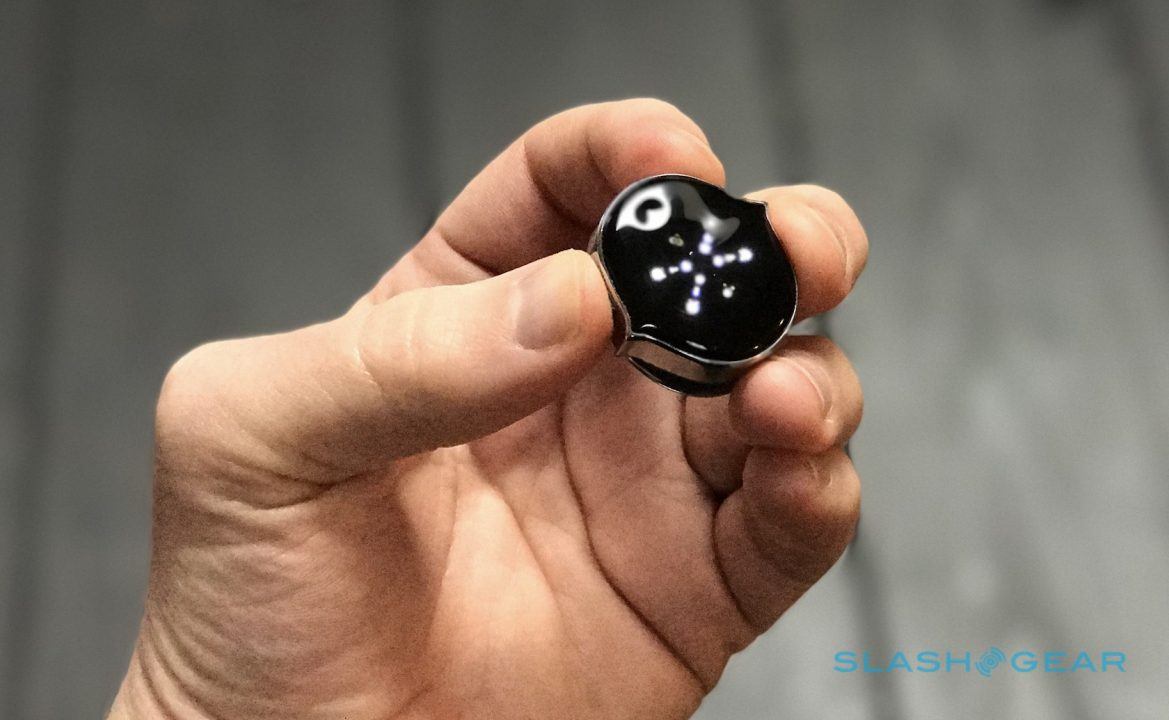 Right now, the front is just for notifications, with LEDs that light through to show when Senstone is listening, when it’s charging, and when it’s communicating with your phone. Production units will have two microphones, and Senstone is talking about background noise cancelation and indirect pickup, among other improvements; this prototype has just one. By twisting off the back you can attach either a lapel clip or a necklace.

Charging is via the carrying case itself, which connects via microUSB; what’s apparently a design issue with this prototype batch means Senstone doesn’t latch into place securely. The company recommended holding it in place with an elastic band. Inside the dock is a battery good enough for two full charges. Ideal placement during use is 8-inches from your mouth, so either clipped to a collar or lapel, or held up to your mouth. 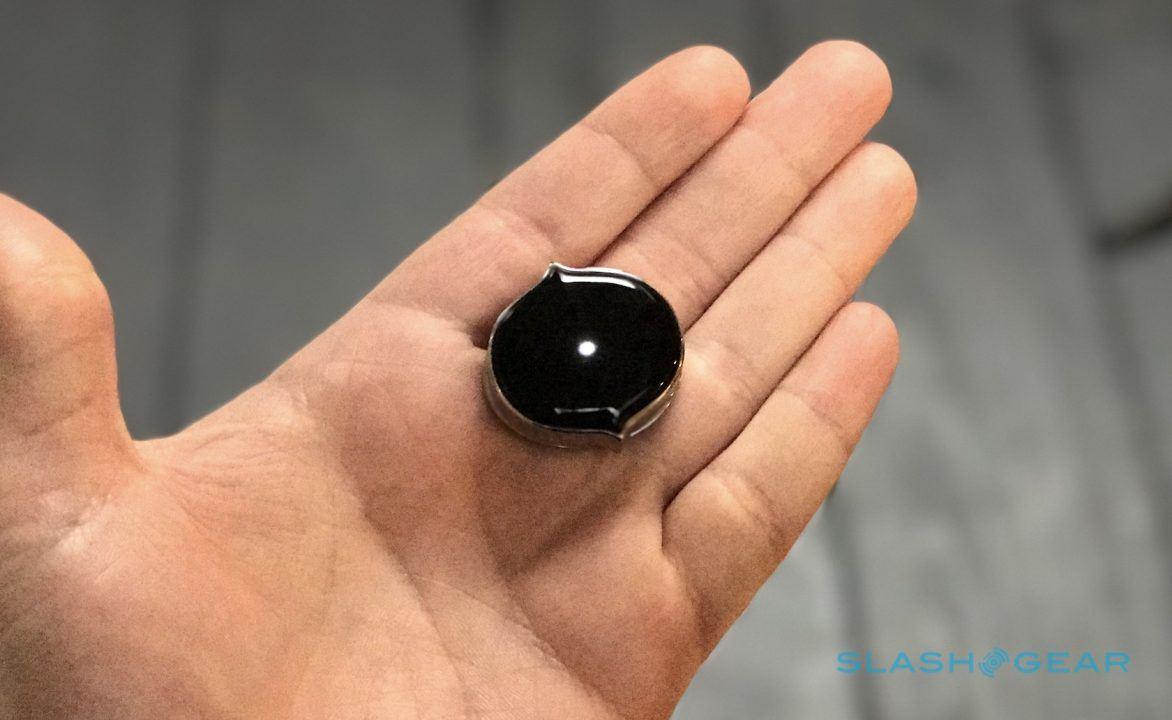 From that point, you use it pretty much like a Star Trek communicator: tap to speak. Currently, notes are limited to sixty seconds each, which Senstone says is because its speech-to-text engine doesn’t work in real-time and it wants to reduce the wait in getting recordings over your iPhone. A future update, the company promises, will improve transfer speeds and introduced real-time text-to-speech, at which point presumably the limit on note length will be removed or at least increased (there’s enough memory inside for 2.5hrs of audio).

As a result, though, hopes I’d had that Senstone would be the ideal interview transcription system were dashed. That’s not just a side-effect of the capped recording time, either: the company says that, with this hardware at least, it’s simply not designed for transcribing speech from multiple people. All you end up with is an audio recording.

Down the line, when that second microphone appears, Senstone says it should be able to do group recordings, presumably leveraging the directionality to figure out who is talking based on their angle from the device. There’s also talk of third-party app support, with voice-command triggering, though it’s unclear who, exactly, the company is working with. Right now, if you give the Senstone iOS app your Evernote credentials it can automatically add new recordings and transcriptions to your account.

For the moment, then, Senstone is a fairly straightforward note-capturing device, though it does offer more than the voice recorder app on your iPhone. For instance, you can add hashtags by voice by saying “hashtag shopping” or “hashtag work”; currently only single-word hashtags are supported. From within the app you can add, delete, and modify hashtags manually. Each note gets a time/date and location stamp, and you can play back the recording as well as read the transcription. There’s search and hashtag filtering, and you can send notes via email and other methods. 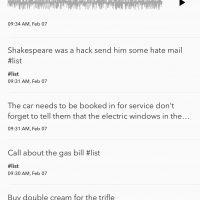 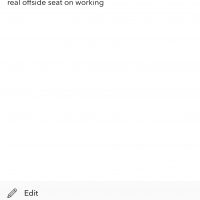 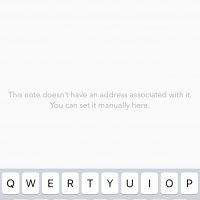 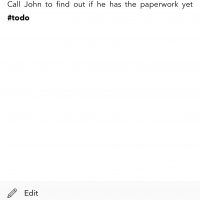 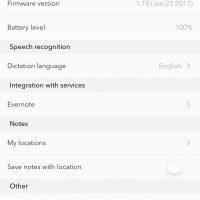 In my testing, a seven second recording took around ten seconds to transfer via Bluetooth to my iPhone 7 Plus and get transcribed. You’ll need a data connection on your phone in order to get speech-to-text processing: without it, Senstone will sync the audio recording alone. You can trigger transcription later on by swiping left on the note and hitting the re-process button.

I can certainly envisage plenty of times where Senstone could be useful. If you have a long commute every day, being able to speak ideas out loud – and, eventually, assign and send them to individual contacts, so Senstone says – would help keep your eyes on the road and hands on the wheel. I imagine parents with small children might appreciate the same flexibility, too. 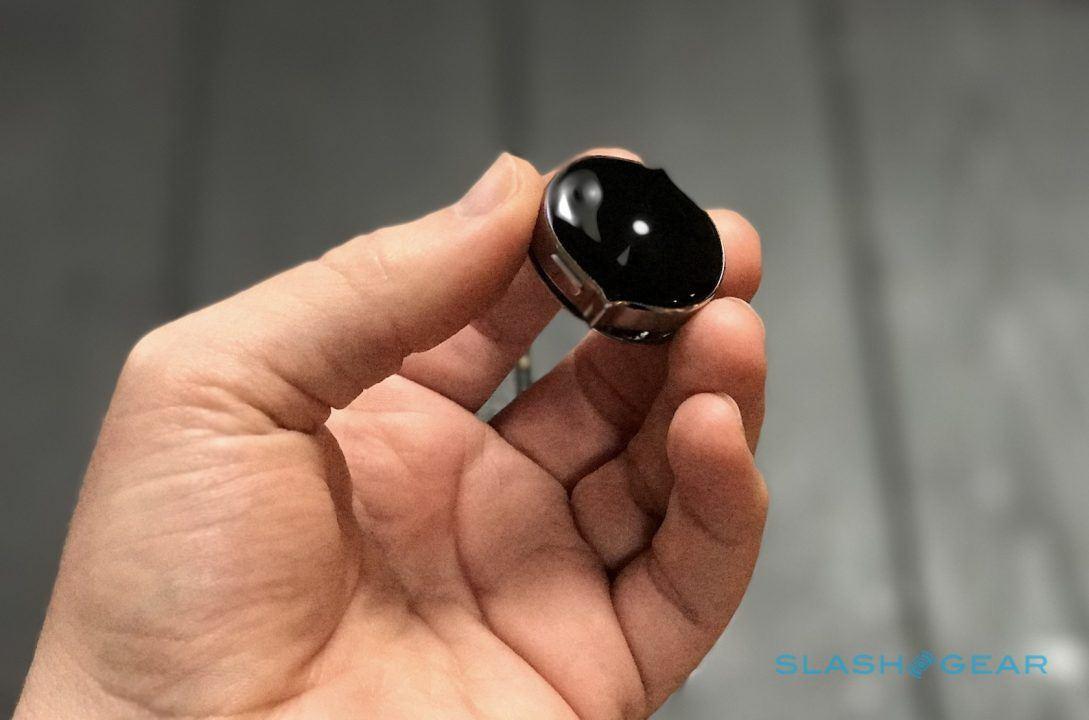 Of course, you can avoid the $145 price for Senstone and turn on voice triggering on your iPhone or Android, and save notes that way. My experience with transcription accuracy there has been mixed, mind, and you don’t get the same tagging support. What will really differentiate it is whether Senstone delivers on its AI roadmap, and there we’ll just have to wait and see. If you’re willing to be an early-adopter, Senstone’s Kickstarter goes live today, aiming for $50k and – if all goes to plan, which of course isn’t guaranteed with any crowdfunding project – with an ambitious July 2017 initial delivery estimate for the earliest backers (who get in on an $80 tier, too).