Nokia’s HERE team is working toward a self-healing mapping system for autonomous cars, tackling the thorny issue of rapidly out-of-date navigation data by giving self-driving vehicles the intelligence to cook up their own HD maps. With cold water liberally poured on Google’s self-driving cars recently given the relatively minimal area within which they can roam, questions have been raised over just how practical such vehicles might be given the constantly evolving road network. According to HERE’s ambitious scheme, though, the fleet of smart cars itself is the key to keeping the data clean.

The issue – and one which many autonomous driving problems have marginalized when they talk of the technology, preferring to discuss real-time sensors like LIDAR – is one of mapping accuracy. Google’s cars, for instance, may be bristling with cameras and lasers to keep an eye out for pedestrians wandering off the sidewalk, but they’re also heavily dependent on preconfigured maps to understand where that pavement actually is. 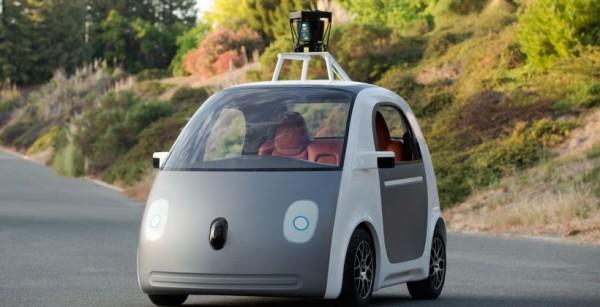 When those maps don’t reflect the real-world, however, the cars face a significant issue. It needn’t be a whole new highway, either: a new stoplight, even a temporary one around roadworks, could stump the cars, Google admitted.

In fact, while Google has sent its autonomous vehicles on around 700,000 miles of test driving, the bulk of that has been around the same roads in Mountain View rather than further afield.

HERE has its own “HD maps” project, exponentially increasing the resolution and detail in its mapping by using far more accurate sensors mounted on top of a team of cars, and gathering data like lane markings, curb height, and more. Problem is, while it’s information-rich it’s also time-intensive.

That’s why, HERE communications manager Christopher Lawton told me, the company is aiming to rely on the sensors from the cars using the HD maps to keep them updated, rather than depending heavily on HERE’s own fleet. 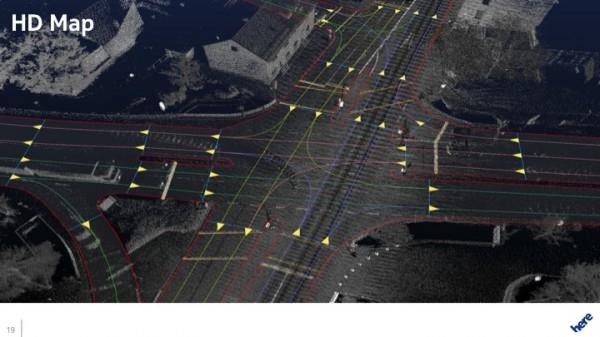 Initially, the heavy lifting would still need to be done by HERE to keep things timely, though the vehicles out in the wild would be used to flag up any dodgy data. “As the number of autonomous cars increases, the sensors on the cars build a view of what they see while driving, which we could cross reference with the HD map,” Lawton explained to me. “When the two don’t match, the car would send us a signal.”

“When you’ve gotten a few signals identifying the same mismatch, we would then go out and update the map ourselves.”

Google apparently has a similar idea in mind, though arguably falls short of HERE’s longer-term ambitions. The Google cars will also flag up potential glitches, project lead Chris Urmson said back in September, at which point Google will follow up with its mapping cars.

HERE, though, is looking beyond that to a time when much of the data can be self-healing, however. “The plan is that, having built our strong base HD map, it will then get enriched with continuous new information provided by car owners,” Lawton says, “so most of the map will be built in an automated way, with our location cloud doing all the hard work.”

“Only when there isn’t enough sensor data on a particular road to see what’s going on, would we dispatch our HERE fleet to remap the stretch.”

Exactly where that tipping point comes – when autonomous vehicles are sufficiently widespread to keep the data clean themselves – is unclear. However, HERE does have some track record with distributed data collection: its traffic team is already using feedback from thousands of mobile devices to spot congestion, pinpoint map inaccuracies, and even flag up potential new points-of-interest. 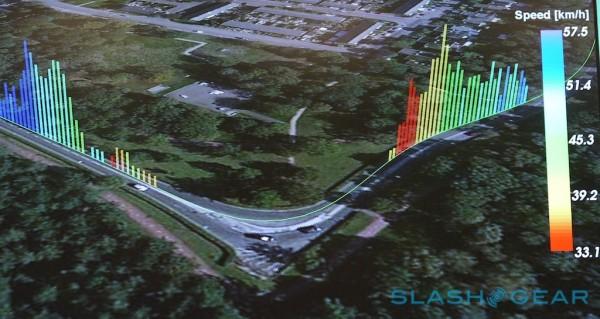 The company calls that “probe data” and, while individually it’s anonymous and contains only a handful of facts like position and heading, when put together as a whole it can show things like where drivers are actually driving rather than where the map says the roadway might be, where new stop signs have been installed, and other facts culled from the “wisdom of crowds.”

HERE first has to complete a full mapping run of the whole country, of course, to get that baseline map, and its hard to imagine its self-healing scheme could be practical for some time. In more controlled deployments, however – such as an urban scheme for self-driving vehicles to replace traditional cabs – it could prove more practical, however.