This week the folks at Scosche have begun a search for developers wanting to make use of a pair of gaming dice they’ve invented for the smartphone and tablet universe. This smartROLL Electronic Gaming Dice SDK the team speaks of will be offered to developers aiming to make use of the new little gadgets, working with games galore by late summer.

With these dice, users wishing for a slightly more real set of possibilities connected with the digital chance-based games they’re aiming for will have such a physical opportunity. While the only other place we’ve seen such technology is in Lenovo’s Gaming table, here it would seem that Scosche is tossing a bit wider net.

These dice work with Bluetooth to connect to devices – just the iPad at the moment, but we’d bet on Android before too long – and an accelerometer in each die to tell the machine they’re working with which side is up. These dice are guaranteed by Scosche to be “evenly balanced” for “completely random results”, and at the moment they’re popping up in red.

Of course the dice aren’t ready for the market quite yet, still speaking to developers about their games being featured on the final packaging, but they’re moving forward full-steam now! With back-lit LEDs flashing as the dice move, Bluetooth SMART technology inside, and the ability to pair at up to 10 dice to one device at a time, these little bits are aimed for a win.

Developers can join in on the fun at the Scosche DICE page where you’ll apply with ease. Have a peek at our upcoming review of the Lenovo IdeaCentre Horizon for more digital dice action as well. 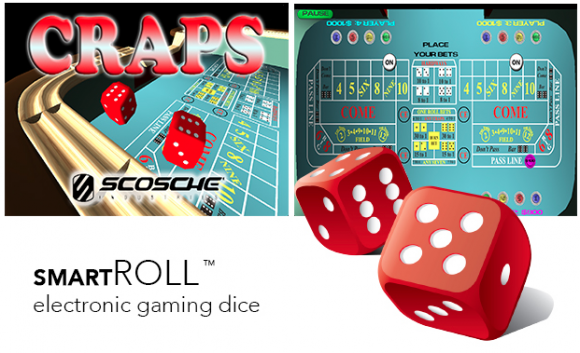