Point SCiO at a leaf and your smartphone will tell you what tree it belongs to. Point SCiO at an unidentified pill on your desk and you’ll see that it’s Ibuprophen. SCiO is a device that’s hand-held, eventually aiming to be small enough to fit on your keychain, made to help you identify objects in your world.

The creators of this project, SCiO, suggest that you’ll be able to walk up to an object and scan it – for about 2 seconds – and have an identification of said object 3 seconds later. SCiO is, at its base, a spectrometer.

A spectrometer is a device which analyzes infra-red energy bounced off of an object, analyzing energy waves to identify said object. This technology is not new, but it’s never really been small – or affordable – in the past.

Doctors will use NIR (near-infrared spectroscopy) spectrometers which can be as small as a football or larger than your laundry basket. Most spectrometers retain a relatively large size and work with relatively old technology to connect to computers for analyzation simply because there’s not a mass market – outside scientific environments – for such devices. 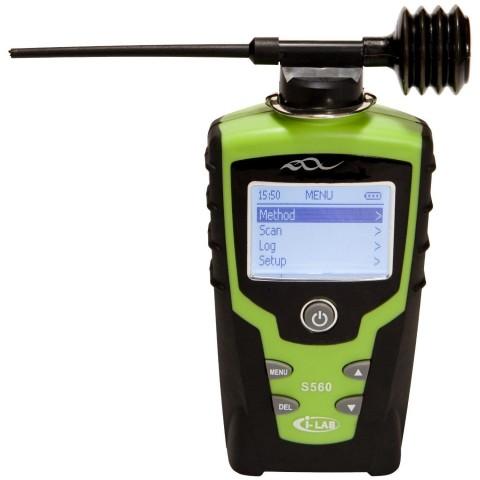 ABOVE: the next smallest comparative device we found this morning – made by i-Lab and coming in at $1500 USD. Not exactly consumer-friendly.

As such, the cost is high as well – the smallest spectrometer we were able to find with a swift search on eBay cost a cool $1,500 USD. SCiO aims to present a “seamless and fluent consumer experience,” will be small enough to fit in your pocket, and is aiming at a price point of $149 (for early adopters), later to be raised to $200+.

If this product can be delivered, it’ll be the first real tricorder – that analysis tool the doctor uses in Star Trek. It’ll be the search engine for the physical world – the one we don’t have yet.

This device also works with an app – you’ll find it connecting to iPhone and iPad devices as well as Android phones and tablets – just so long as they have Bluetooth 4.0 LE.

It’s suggested by the folks who make SCiO, Consumer Physics, Inc., that they aim for a December 2014 delivery date for KickStarter devices. At the moment, the project has $772,258 of its comparatively tiny $200,000 USD asking pledge funded – with 41 days to go.

ALSO: Yes, the device in preview images and videos that looks like it’s shining a light at fruit is, by all likelihood, an LED flashlight. It’s there as a visual stimulant while the real scanner has no lights at all.

UPDATE: We’re getting a lot of feedback along the lines of “it looks to good to be true.” Until we get our hands on a model ourselves, we’ll continue to be skeptical as well, of course. Stay tuned – we’ll aim to have one for review before you know it!