Researchers at EPFL have developed a new imaging technique that combines two different microscopy methods. By combining the two methods, researchers can see what’s happening inside cells and on the membrane of the cells at the same time. The combination brings an unprecedented look inside cellular processes, such as those that happen with infection, among others.

Learning more about cells is extremely important to researchers because cells are the fundamental components of living organisms. Scientists need to study cells and cellular phenomena in detail to gain information and insights into various disease conditions. EPFL researchers from two labs jointly developed the new system allowing them to watch living cells in action with unprecedented precision.

The new technique combines stochastic optical fluctuation imaging (SOFI) with scanning ion conductance microscopy (SICM). SOFI allows scientists to view targeted molecules and various phenomena that occur inside cells. SICM, on the other hand, involves touching a cell directly with the probe tip to reveal the cell’s surface and map cellular typography. One downside to that technique is that contact between the sample and the probe is detrimental to the ability to observe living cells because it disturbs the native state of the cells.

To get around that issue, team researchers developed a microscope that replaces the physical probe with a glass nanopore to measure the flow of ions allowing for detection of the cellular surface without needing contact. The combination of both methods provides researchers with unprecedented scientific observation capabilities. Scientists can look inside living cells with the new system while generating a 3D topographic image of the cellular membrane. 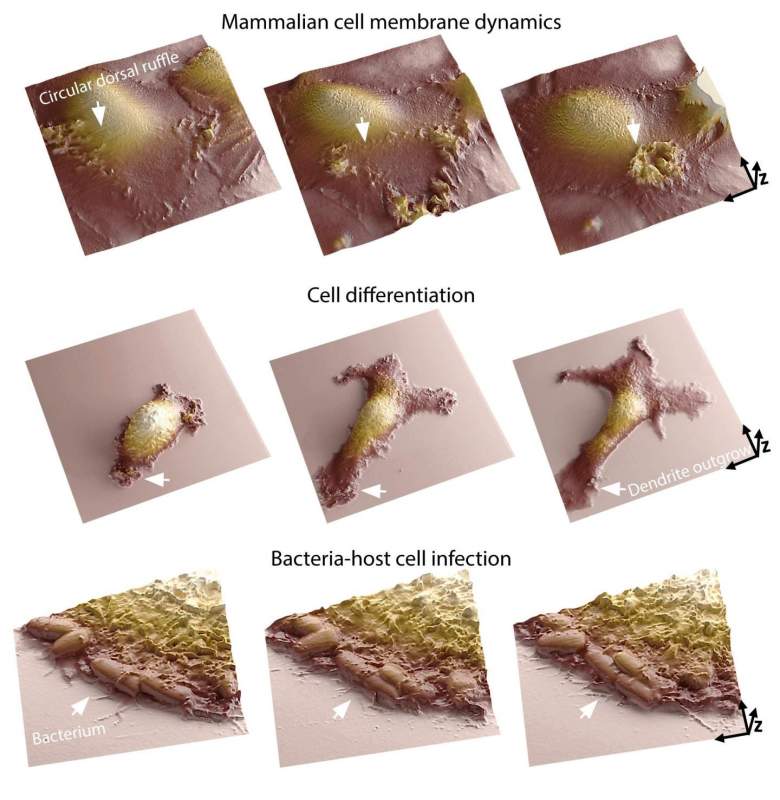 Essentially, the system allows researchers to view inside and outside the cell simultaneously to discover links between processes occurring in separate locations of the cell. Another critical improvement by combining the two methods is an “incredible” improvement in image quality. That improvement allows observation of cells at a much higher resolution than previously possible.

Researchers expect to use their new system to observe phenomena including cell motility, cellular differentiation, and cell-cell communication. The innovation is critical to study of that type because it allows researchers to understand how a cell reacts in real-time to stimuli from outside.

Researchers from EPFL work on a wide array of research. In August of this year, EPFL scientists created an eel-like swimming robot called AgnathaX. It was designed with inspiration from a primitive fish called a lamprey, which looks like an eel. It utilizes force sensors along its sides that mimic pressure-sensitive cells on the lamprey so the robot could detect the force of water pressing against its body.

In November of last year, engineers developed a computer chip that integrated logic and data storage in a single architecture. In October 2020, researchers created a new type of drone-based on the design of a bird. That research created a drone after carefully studying the shape of bird wings and tail while researchers investigated its flight behavior. The project’s goal was to create a drone that had the agility of some types of birds when flying through crowded spaces such as forests and dense urban environments.