Element Z=117 has been acknowledged this week by a team of scientists, these scientists having successfully created several atoms of said element in a lab. This lovely piece of creation will – once it’s finalized – be element 117, for now it’s code-named Ununseptium. Final confirmation will need to be independently carried out – you can’t just jump in after 3 years of research and declare a new element, after all.

Scientists at the GSI research facility in Darmstadt, Germany along with scientists from Oak Ridge National Lab in Tennessee produced Z=117 starting with Z=97, also known as Berkelium. This element was bombarded by Calcium ions, eventually creating 117. Believe it or not, this element is so extremely unstable that the scientists in this experiment did not observe it directly.

Instead of seeing element 117, this group of scientists caught glimpses of its decaying state. Once element 117 is formed, it immediately begins to decay into elements 115 and 113.

This creation and discovery is the result of scientists from the GSI research facility in Darmstadt, Germany and scientists from Oak Ridge National Lab in Tennessee. The original observation of this element was made all the way back in 2010 when a paper was published by Yuri Oganessian at the Joint Institute for Nuclear Research in Dubna, Russia.

There a joint effort between Russian and US physicists first created superheavy element 117 – now we’re just a whole lot closer to making it Periodic Table official. 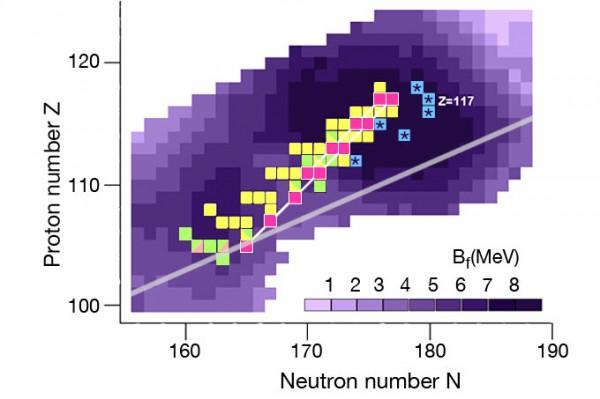 This is all part of an international project aiming to explore the “island of superheavy elements” – as seen above. Once every 2 to 3 years, a new element is discovered, all living as stable nuclei around atomic number 114. These superheavy elements are resistant against nuclear decay – the lot of these elements are coming together to create an “island of stability.”

We must assume there are a whole lot more where these have come from too – keep an eye out in another 2.5 years!