Samsung has pulled all Galaxy Tab 7.7 tablets from its IFA 2011 stand, as well as removing or covering any mention of the Honeycomb based tablet, in what appears to be further fall-out from the ongoing legal battle between the company and Apple. “Samsung has removed the Galaxy Tab 7.7 from our stand at IFA,” Samsung Europe spokesperson Brendon Gore told SlashGear. “We cannot make any further comment as we have not received an official statement from the court.”

However, Gore was at pains to point out that the decision to yank the Galaxy Tab 7.7 – which Samsung announced with great fanfare only on Thursday – was made voluntarily, rather than at the court’s behest. Where previously the slate had on show across two demo tables, now all branding has been replaced or removed and the slots filled with the Galaxy Note and Wave 3. Meanwhile, several members of the Samsung team were apparently measuring the now-covered Tab 7.7 wall poster, presumably either to replace it for the remainder of IFA 2011 or to arrange a more permanent draping. 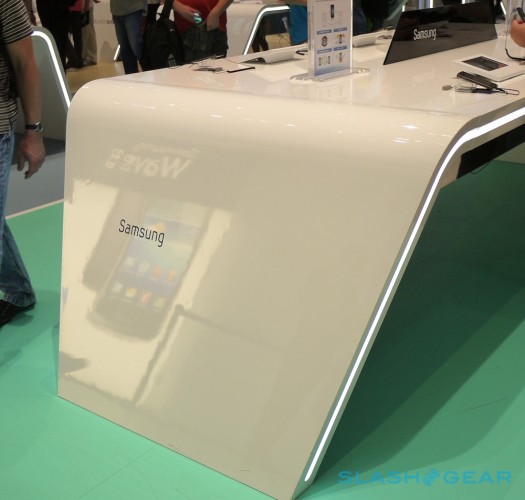 Apple’s legal team managed to secure a preliminary injunction against the Galaxy Tab 10.1 in Europe back in August, which prevented sales of the slate from going ahead. That was later limited to Germany alone, with Samsung agreeing to neither sales nor promotion of the 10-inch tablet in the country.

While full details are not yet available, it could be that Samsung and Apple’s lawyers have already clashed and that the Cupertino legal team expects to have a similar injunction against the new Tab 7.7 soon. We won’t know until court documents or an official announcement arrives, however.