Today we’re taking a peek at an unfolding story of Samsung teaming up with the clothing and accessories brand Supreme. An announcement was made at Samsung’s China-based reveal event for the Samsung Galaxy A8s that the brand Samsung would be collaborating with the brand Supreme. In a twist, it would appear that the Supreme in this collaboration is not the original Supreme, but an Italy-based group that aimed to essentially steal the Supreme brand for their own products.

What is Supreme Italia?

In the year 2015, a company called Trade Direct Srl (TDS) filed an application for the Supreme brand at the Italian Patent and Trademark Office – that became Supreme Italia. In the year 2016, TDS, aka “Supreme Italia” was taken to court by Supreme New York (the original Supreme brand). SNY suggested that TDS was using their trademark and brand image without authorization.

Oddly it would seem that the real Supreme brand won their court case against TDS and that the full verdict states that TDS exhibited Parasitic Unfair Competition. Consequences apparently included 120k “Supreme” products being removed from the market, and that TDS would pay Supreme €5,500 for legal fees.

So, according to that court ruling, Supreme Italia should be dead and gone, right? Not entirely, apparently. Something else seemed to linger after the fact.

At the China-based Samsung Galaxy A8 event, Leo Lau, Senior Manager of Digital Marketing, Samsung Electronics Greater China introduced who he suggested were the CEOs of Supreme. Onstage it was announced that Samsung would be cross-branding with Supreme!

It was also announced that this would be the first time Supreme would make products available in China, and that Samsung and Supreme would open a 7-story flagship store in Sanlitun, Beijing in the year 2019! These CEOs and Leo Lau suggested they’d be holding a “show” at the Shanghai Mercedes-Benz Cultural Center in the first half of 2019. 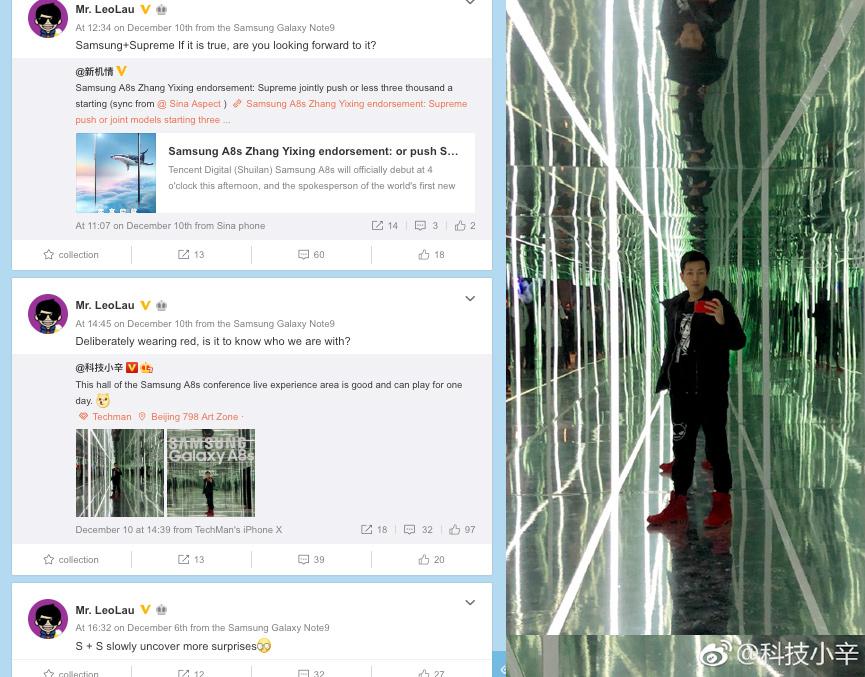 Above you’ll see some comments from Leo Lau’s Weibo account leading up to the event.

But wait a second, said the real Supreme brand, we’re not in China, who is this? Supreme sent out a statement on the subject soon after the event was broadcast.

“Supreme has not partnered with Samsung, nor will it open a flagship store in Beijing or participate in the Mercedes-Benz fashion show. These words are all from a counterfeit organization. Forged and distributed.” – Supreme New York

Another note was sent via Instagram from Supreme New York with a similar message:

“Supreme is not working with Samsung, opening a flagship location in Beijing, or participating in a Mercedes-Benz runway show. These claims are blatantly false and propagated by a counterfeit organization.” – Supreme New York

Not long after the statement from Supreme NY, Samsung’s Leo Lau responded in kind.

The note was originally posted to Leo Lau’s account for microblogging over on Weibo. That post has since been deleted. We’ll update this article as we hear more.

UPDATE: Above you’ll see an apparent live in-effect Fake Supreme store in China still open as of August 16th, 2018. This isn’t necessarily run by Supreme Italia, but it does make clear the fact that there’s enough demand in China for “Supreme” goods that people are putting in the effort to make their own fake store.

UPDATE 2: Some time before December 12th at 9:20 AM Central Time, Leo Lau deleted all references to the Samsung + Supreme announcement from his Weibo account.

“Recently, Samsung Electronics announced at the launch of the Galaxy A8s that it will cooperate with Supreme Italia in the Chinese market. We are currently re-evaluating this cooperation, and we deeply regret the inconvenience caused.” – Samsung Weibo Account “SamsungMobile”