Samsung have announced a new iPod shuffle competitor, and they’ve taken the Apple MP3 player’s shake functionality to its reasonable-logical conclusion.  The Samsung TicToc has only one button; track playback is controlled by shaking the mediaplayer, and the TicToc can automatically choose a slow track if you shake gently or a faster one if you’re more vigorous.

As for that single button, usually it controls power but, when held down, it adjusts the volume – you hold the TicToc upside down to reduce volume, or the right way up to increase it.  No display (nor anything like Apple’s VoiceOver track announcement) but the presumption is that with only 2GB or 4GB of memory you probably won’t need it.  MP3, WMA, OGG and FLAC tracks are supported, and battery life is up to 12hrs; Samsung have also produced a little docking station to recharge and sync the PMP.  Look for the Samsung TicToc later in 2010, price to be announced. 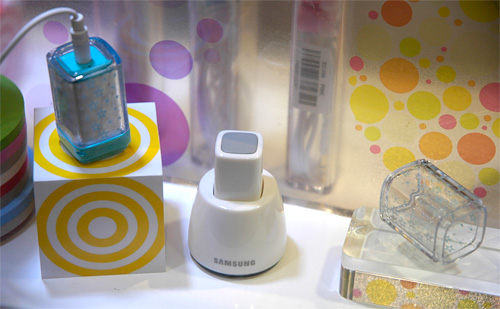