Researchers from Samsung’s Emerging Technology Lab are working together with the University of Texas, Dallas, to develop mobile devices that can be controlled using your mind. Innovation is a huge aspect of the tech world and Samsung is looking to jump miles ahead of its competition. This technological advancement will be beneficial to people who suffer from various mobile impairments. and would be a huge game changer for the tech industry.

Right now, the researchers are working on this new feature using the Samsung Galaxy Note 10.1. Using the power of their thoughts, the people who are testing out the mind-controlled Samsung Galaxy Note 10.1 can launch applications, shuffle through music, turn the tablet on and off, and much more. The testers wear a cap equipped with EEG-monitoring electrodes to convey their actions. 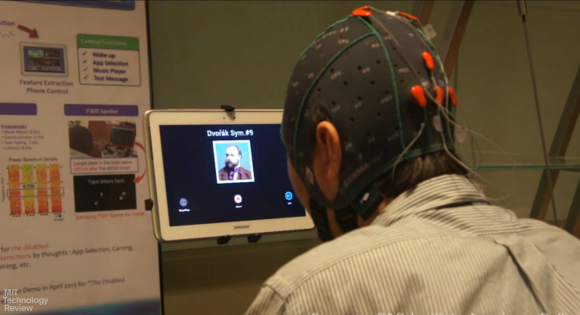 The cap uses EEG-detected brain signals to launch an action. The researchers monitor “well known brain activity patterns that occur when people are shown repetitive visual patterns.” By just focusing on an icon blinking at a certain frequency, the testers can perform various actions like launching apps and pausing/playing music. Users were able to perform an action with their mind at a speed of one action per 5 seconds, with an accuracy rate of 80%-95%.

The researchers still require a lot more research in order to make this innovative feature a reality, but they’re working diligently to do so. Samsung’s lead researcher, Insoo Kim, says, ”

Robert Jacob, a Human-Computer Interaction Researcher at Tuft’s University says that this research project will help find more ways to allow users to communicate with their mobile devices. This research will hopefully allow users more control over their mobile devices, and will still allow you to “stick the phone in the pocket.” However, unfortunately for us, when this new feature does become available for mobile devices, Roozbeh Jafari, an Assistant Professor of Electrical Engineering at the University of Texas, Dallas, says that people may have to wear an EEG-cap to use it. Let’s hope that that cap is at least fashionable.