Samsung’s newest SSD is now available, with the Samsung T7 announced back at CES 2020 finally ready to slip into your pocket. Smaller and cheaper than the T7 Touch Samsung already launched – and which has a fingerprint sensor along with its solid-state drive – the regular T7 opts for simplicity instead.

As a result there’ll be just three capacities: 500GB, 1TB, and 2TB. Each will be offered in a choice of three finishes: Metallic Red, Indigo Blue, and Titan Grey.

It’s a small drive, certainly. The aluminum case is about the size of a business card, albeit thicker of course. Despite that, it’s still shock resistant: Samsung says it can handle a drop from up to 2 meters, or over 6.5 feet, without sustaining damage. There’s a three year limited warranty.

While it’s not a Thunderbolt 3 SSD, the Samsung T7 still is fast. Indeed, the company claims it’s offering the fastest transfer speeds so far on a USB 3.2 Gen 2 drive. You can expect up to 1,050 MB/s read rates, and up to 1,000 MB/s write rates, making it roughly twice as fast as the old Samsung T5. 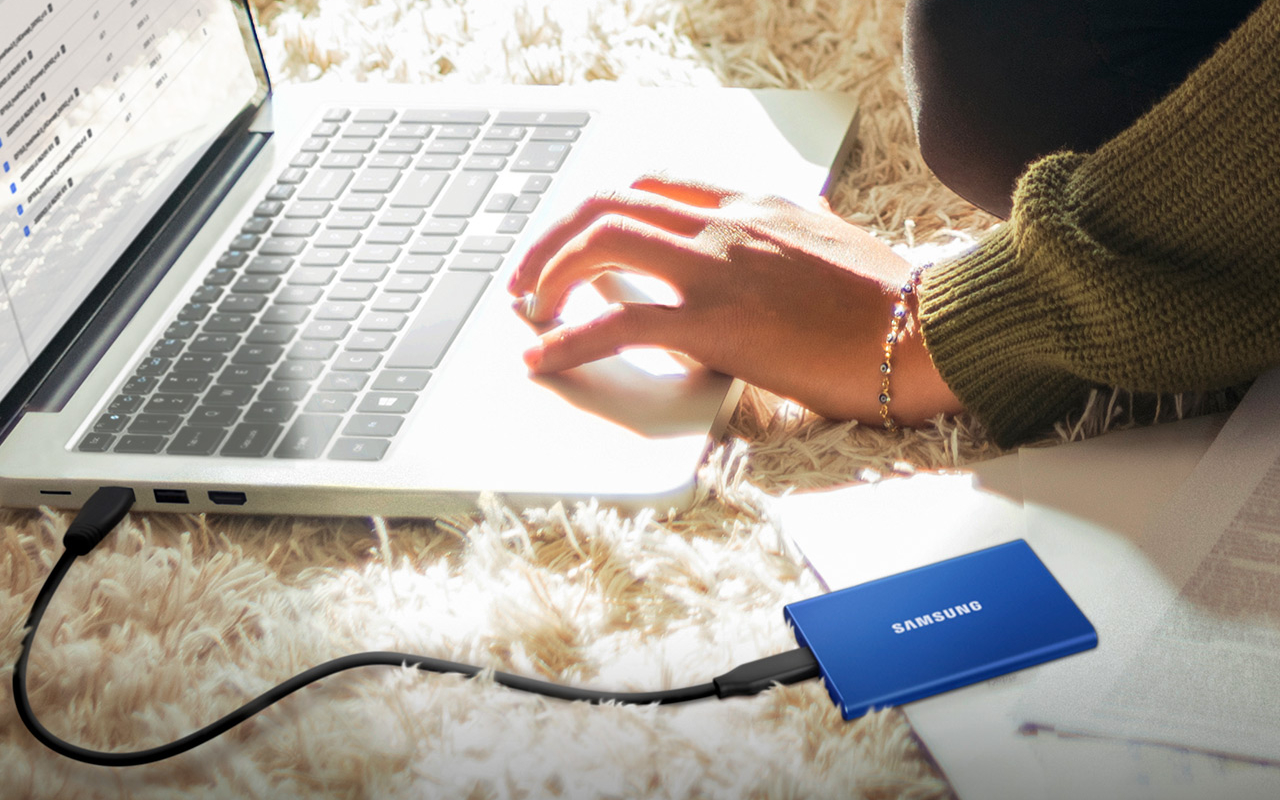 It’ll reach its maximum speed thanks to the new NVMe interface, Samsung says, rather than the SATA drive in the old T5, though you’ll need to be running UASP mode in order to make the most of that. There’s a USB Type-C-to-C cable in the box, along with a USB Type-C-to-A cable if your computer only has one of the older style ports. It’s compatible with Windows, Mac, and Android, with the optional AES 256-bit hardware data encryption which will demand a password before your files can be accessed.

If you’ve got an iOS or iPadOS device, meanwhile – like an iPad Pro – and you want to use the T7 with it, that will work too. There are some caveats, mind. Since Samsung doesn’t have an iOS/iPadOS version of its security app, you won’t be able to actually unlock the SSD with Apple’s devices. Leaving the security switched off, however, should mean you have no problems.

Altogether, this seems like a good compromise for someone looking for extra storage, without breaking the bank, but with only minimal compromises on performance overall. Thunderbolt 3 drives are undoubtedly going to be capable of faster throughput, but they’re also going to be significantly more expensive than Samsung’s pricing for the T7. It’ll start at $109.99 for the 500GB model, $199.99 for the 1TB model, and finally $369.99 for the 2TB.