As Samsung’s series of Apple-crushing advertisements came to a conclusion (or so they say) at the SuperBowl, Twitter filleted the finale as a terrible final note. This advertisement for many was their first look at the Galaxy Note, a device which has been out overseas for several months not, it having a gigantic display, the power of the Galaxy S II, and a stylus. The commercials made by Samsung in this same vein up until now were praised for their ability to capture the viewer and make simple sense to both Android and iPhone users – according to Twitter users, Samsung threw that winning formula out the window completely for the final installment.

The advertisement starts off with the same set of actors standing in a line waiting for whatever Apple product is set to be released next. They’ve already gone through all the winning points: that they hate standing there, that they’re bored of their devices, that they’re secretly wishing for something outside their religion. Then they see someone circling a photo they just took with their Galaxy Note.

At this point everything breaks down and the point is lost. As with all Superbowl commercials, the point is to make the audience remember your advertisement, even at the cost of them forgetting your product. As Twitter users galore this weekend spoke up on right after the Samsung commercial appeared, Samsung did indeed capture their attention, but may have done so in the worst way. Twitter users saw the stylus as Samsung’s trump card and told them exactly what they thought about it: this is Palm’s secret weapon.

Samsung had the opportunity to stay simple and powerful as they had been doing in their collection of advertisements leading up to this point, but they fell victim to the pressure that is the SuperBowl cost per ad spot and bought The Darkness and a song from several years ago that, though is still a good song, has nothing to do with Samsung or their products. You’ll also notice a couple other devices from Samsung running on AT&T throughout the commercial, this further confusing the point. 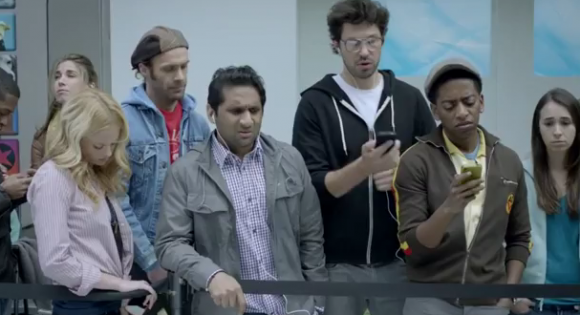