Is your tablet for consuming content or for creating it? If you’ve been tracking the slate market for any time then you’ll know that’s a big question, and it’s one Samsung has been quick to take sides on with the new Galaxy Note 10.1. A freshly-released promo video – which you can see after the cut – for the 10.1-inch quadcore Android tablet shows just how its digital stylus can be wielded during work, rest and play.

Potentially most interesting to those who harbored a longstanding soft-spot for Microsoft’s Courier concept is the split-screen digital notetaking. Samsung shows how two apps – such as the browser and its own S Note journalling tool – can be kept on-screen at once, with snippets of one half carried over to the other. 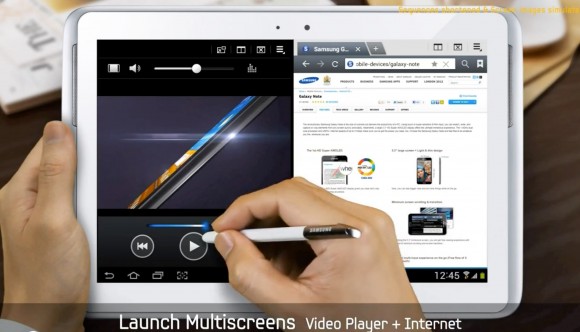 Alternatively, you can have the browser open while playing video, and there’s support for resizing one of the windows and dragging it around on top of the main app, similar to what we saw of the Galaxy S III’s picture-in-picture video playback. However, it’s not just Multiscreen that the Note 10.1 does well at; it’ll also stand up as a digital sketchbook, photo editor and more.

Finally, there’s AllShare Play GroupCast, which allows multiple tablets to be linked together so that pen movements on one are mimicked on the other. Whether or not a slate needs a stylus is still something particularly controversial, not to mention whether tablets are primarily meant to be consuming content rather than creating it, but it’s clear that Samsung has ambitions toward the latter.