Samsung acquired SmartThings back in 2014, and set to work integrating things like Bixby and its range of home appliances into the platform. While there are a handful of SmartThings connected home devices – including security cameras, motion and door sensors, and other IoT gadgets – the platform’s main strategy was in trying to link together third-party devices in a more seamless way.

Currently, there are more than 5,000 devices supported in the ecosystem, Samsung said today. That’s more than the roughly 450 devices Apple says are compatible with its HomeKit platform, certainly. At the same time it’s far short of the 10,000+ devices Google says are compatible with its platform, or the 85,000+ Amazon boasts will work with Alexa.

To try to catch up with those rivals, Samsung is trying to make it easier for partners to integrate. There’s already the ability to link either directly or virtually, through the cloud, to SmartThings. From early 2020 there’ll be a new SmartThings Device SDK Beta program, to fast-track compatible devices to shelves. 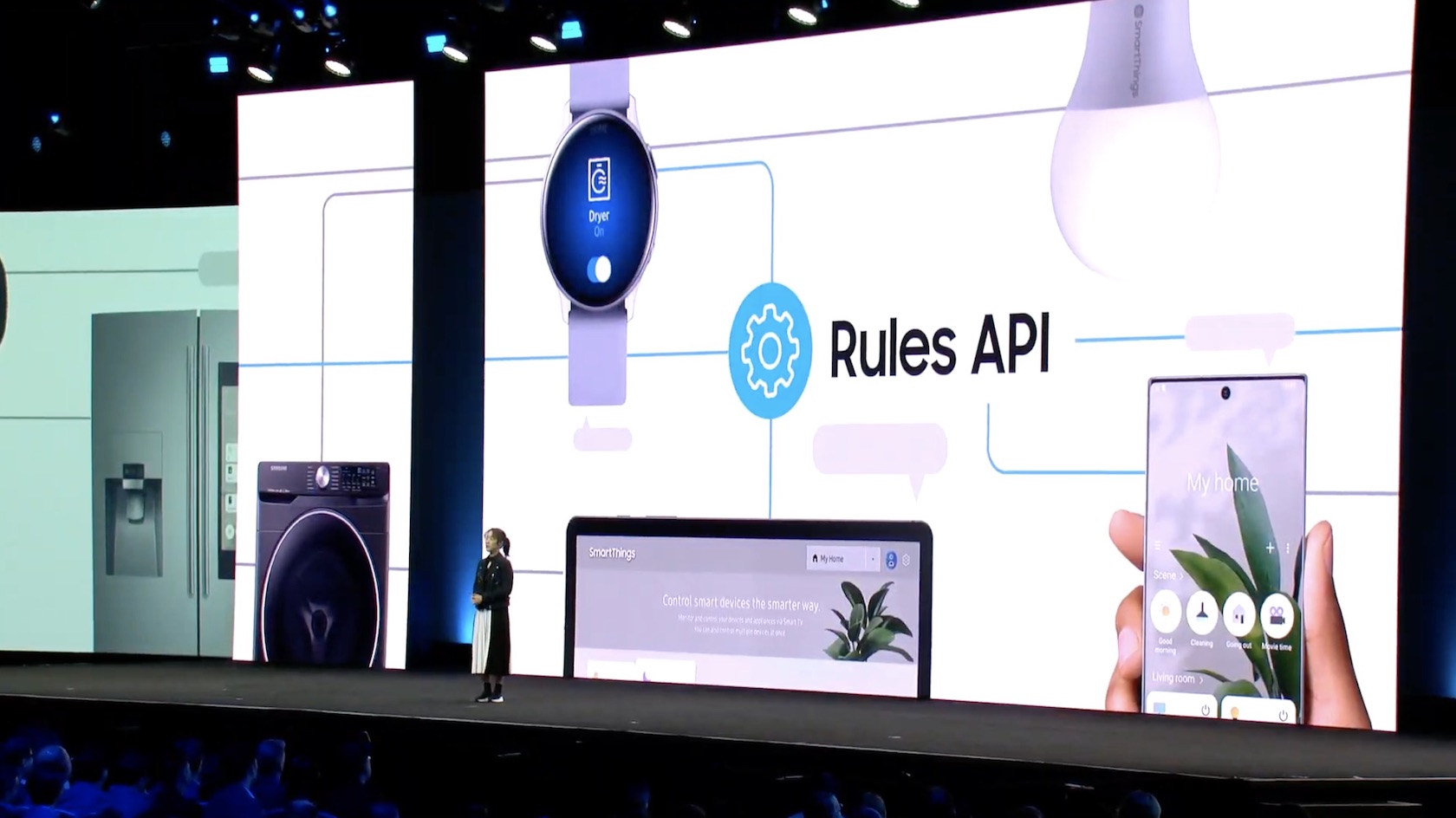 As for the new Rules API, Samsung is building on shortcuts and automation. You could already link multiple SmartThings devices together, to be activated at the same time. Samsung is building on that with more flexibility and more intelligent rules for device-makers, however, though the company isn’t saying much on exactly how it will work.

What we’re assuming is that, with Bixby for example, you’d be able to tell the assistant that you’re ready to watch a movie, and have the lights change, blinds close, thermostat set, and other devices react. The exact settings of each could be dependent on time of day, who’s watching, and other factors. Manufacturers and other SmartThings partners will be able to bypass managing servers, time-based preferences, and individual settings.

Samsung is also adding local execution support “soon,” the company says. That will trim latency, so that rules act more snappily. It’ll also mean independence from your internet connection, so that even if your cable or DSL is down, your rules will still run as expected. That could’ve come in useful when SmartThings downtime last year took the whole system offline.

Samsung isn’t waiting for individuals to upgrade, however. It’s already been pushing SmartThings as an integrated system in routers, set-top boxes, and other devices, with numerous cable modems also operating as a SmartThings Hub. NVIDIA’s newly-announced SHIELD TV Pro will, with a SmartThings Link plugged in, work as a hub too.

More broadly, Samsung is hoping to make new homes SmartThings-ready even before people move in. Its Smart Apartment vision will see it work with providers like Entrata, Ruckus, and iQuue, so that new homes are wired from the start with connected home features compatible with SmartThings.