Just when you thought the hype around curved and flexible devices is over, here comes Samsung somewhat trying to fan the flames again. At the InterBattery 2014 exhibit in Seoul, Korea, the electronics manufacturer is boasting of one of the fruits of its fantabulous R&D budget and marketing prowess. A flexible battery, one that can perhaps go along with a flexible screen, is the latest masterpiece of the Korean OEM, but don’t go expecting to see it in consumer devices within the next few years.

Around the second half of 2013, Samsung and LG were head to head in the battle for curved devices, particularly when it came to the displays. However, curved displays, which are now getting more common in wearables and curved TVs, are only one step towards the type of flexible and deformable devices, not just screens, that these manufacturers are dreaming of. The next steps involve curved or flexible components. And the biggest stumbling, almost literal, block of them all is the battery.

By nature, batteries are solid chunks, whether they be rectangular, circular, or cylindrical. The challenge, at first, is to develop batteries that could take on a more unorthodox shape. But the real goal is to create one that can be bent and deformed whichever way you please. To that extent, Samsung might have reached that utopia, or at least have started to. The flexible battery it is showing off is still rectangular in shape but it is considerably thin and, more importantly, can be deformed, at least on one or two axis. Battery you can mold into a whole different shape? That’s still a pipe dream. 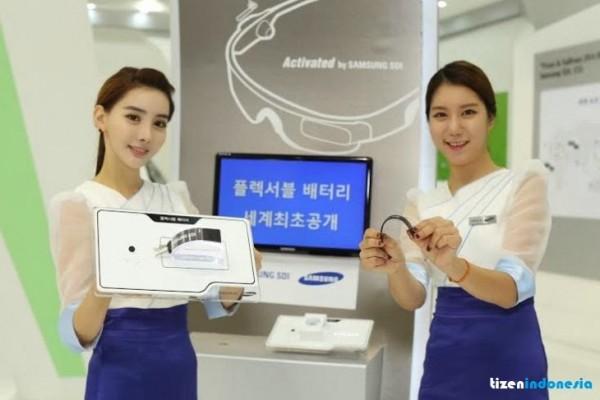 To be fair, Samsung can’t claim to be the first, and definitely not the only, one to have reached that goal, at least to some degree. As far back as October last year, LG’s battery-making arm was already showing off its own R&D, producing stepped batteries, a curved yet solid one, and a “cable” battery. That last one is a tad more interesting as it is composed of cables that can be bent, wound, and tied up, much more flexibly than this Samsung piece.

Sadly, none of these, not even Samsung’s most recent batteries, are ready for primetime just yet. Samsung claims that it will take a few good years before they become consumer-ready. And even when they do so, these batteries are most likely to be used first on devices such as smartwatches and other wearables. Those flexible smartphones and tablets aren’t coming out of the woodwork just yet.

VIA: G for Games, Tizen Indonesia