By now, Samsung’s early devotion to Microsoft’s upcoming mobile Operating System, Windows Phone 7, is pretty apparent. This time around, we’ve got the Omnia 7 posing for a photo, showcasing the calendar view within Windows Phone 7. Unfortunately, there’s not a lot of information on the device in question, and there are some people who believe that it could be the Samsung GT-i8700 that recently broke cover, posing for another round of photos.

However, upon closer inspection of this device, reportedly known as the Omnia 7 (the Omnia series is only at “2” at the moment, but it looks like Samsung is making an exception for the launch of WP7), looks a bit different than the i8700 that broke cover not too long ago. This new device has a curved top, and the display seems to be wider than the one we saw on the i8700. The buttons below the display, the Windows key, Back, and Search are the same, but considering the rules set in place by Microsoft, that’s no surprise.

It’s possible that this new handset, caught in some bad lighting, is indeed the GT-i8700, but the subtle differences may indeed mean that this is something else, and Samsung is intending on releasing yet another handset into the wild promoting Windows Phone 7. Below, you’ll find the image of the i8700, so you can compare the two, and let us know what you think in the comments. 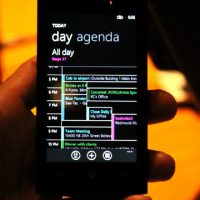 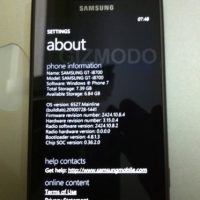