Get ready for the next wave of graphics, machine learning, and parallel computing performance, as Samsung kicks off production of HBM2 DRAM. The new chips, each packing 4GB, use the second-generation High Bandwidth Memory interface and can run as much as seven times the speed of current DRAM.

That makes a big difference in so-called high performance computing (HPC) applications, as well as in intensive graphics and network processing, and in enterprise servers.

What helps make the 4GB HBM2 DRAM chip special is its size. Built using Samsung’s 20nm processes, it results in a chip that’s compact enough to fit onto a regular graphics card.

As you might expect, that’s required some clever packaging to achieve, and to keep the footprint small Samsung has done some nifty stacking. A buffer die sits at the ground floor of the pile, topped with four 8-gigabit (Gb) core dies. Each is interconnected with microbumps and more than 5,000 TSV holes per layer. 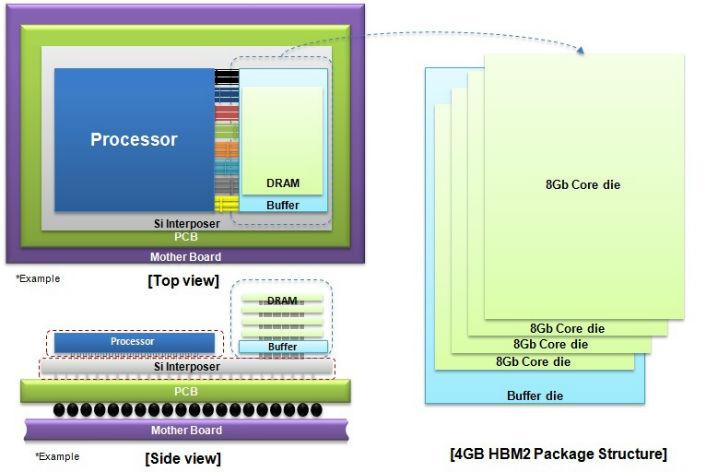 Total bandwidth is 256 GBps, twice that of the HBM1 DRAM chips that Samsung began producing only a short time ago. Compared to a 4Gb GDDR5 chip, meanwhile – still considered “fast” by memory standards – it’s more than seven times faster, while also throwing error-correction into the mix.

Just to finally sweeten the deal, Samsung says the 4GB HMB2 chips offer double the bandwidth per watt compared to 4Gb GDDR5, so systems can be more power-frugal too.

Next up comes 8GB HBM2 DRAM packages, which Samsung Semiconductor says it’s on track to produce in 2016, and which will further reduce the footprint required for sufficient memory to handle graphics-intensive tasks.

For you and I, thinking of what memory we might want in our next video card, it might be a while before HBM2 makes an appearance. Still, with the cutting-edge in performance graphics for the home user and gamer hitting the top-end of GDDR5, it seems only a matter of time before the need for speed pushes us into the realms of HBM.