Samsung whet our appetite with the Galaxy Z Fold 2 alongside the Note 20, and now it’s back to spill all the details – and the price tag – for its next foldable phone. Follow-up to the original Galaxy Fold, the Fold 2 actually shares a fair amount of its DNA with the smaller Galaxy Z Flip, and when it comes to both design and usability that’s no bad thing.

First off, the question we’ve had on our minds for months now: just how much is the Galaxy Z Fold 2 going to cost? Pre-orders will kick off on September 2, at 12:01am ET, and the foldable phone will be $1,999. Deliveries will begin from September 18, and it’ll be available from Samsung direct, as an unlocked device, and from AT&T, T-Mobile, and Verizon. 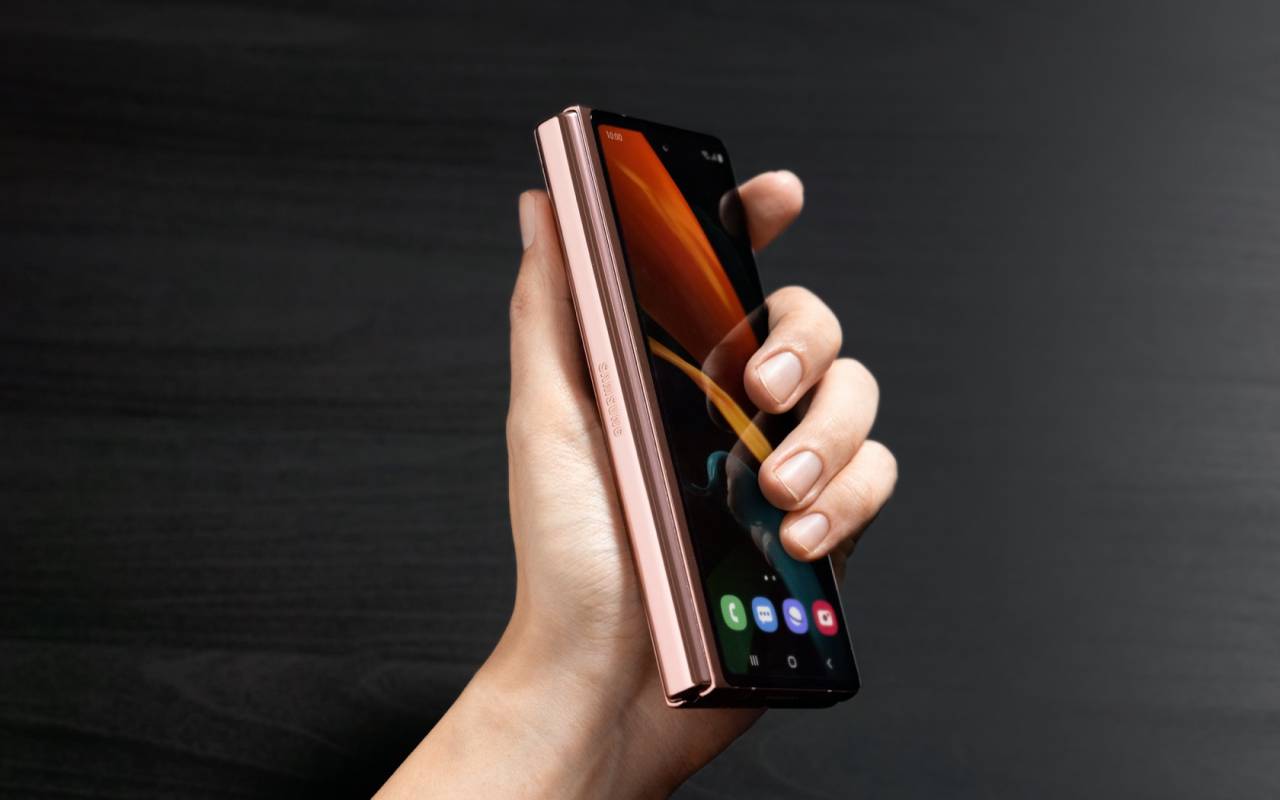 That’s not a small price tag, sure, but then again the Galaxy Z Fold 2 is no ordinary device. As we saw, the outside gets a much larger touchscreen: at 6.2-inches and HD+ resolution, its Super AMOLED panel is akin to that of a Galaxy S20. You can interact with the whole system that way, too, for those times you don’t need the maximum internal screen. It also gets a 10-megapixel selfie camera. 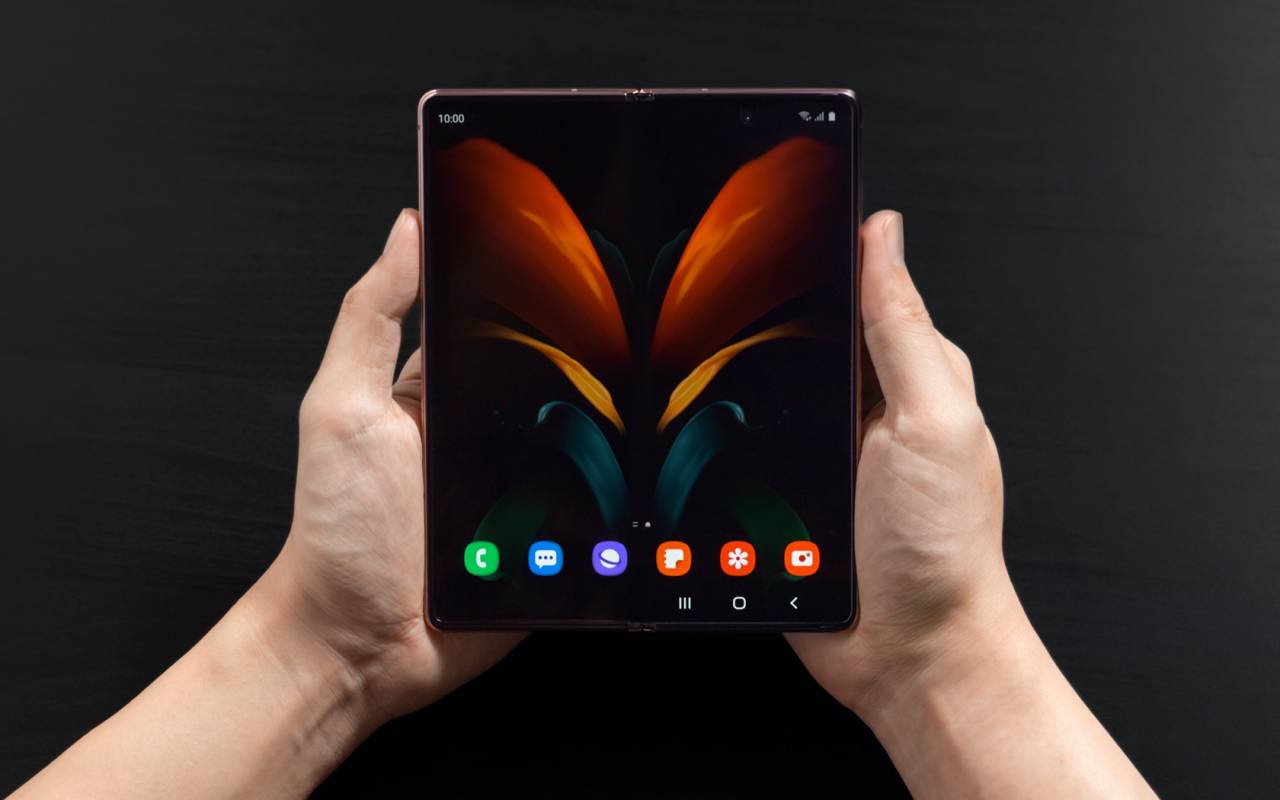 Open the foldable up, however, and there’s a 7.6-inch QXGA+ Dynamic AMOLED panel, running at 2208 x 1768 resolution. It supports up to 120Hz refresh, with adaptive rates that can scale automatically from 11-120Hz depending on what’s on-screen. However, that’ll only be available in Full HD resolution; anything higher and you’re locked to 60Hz. 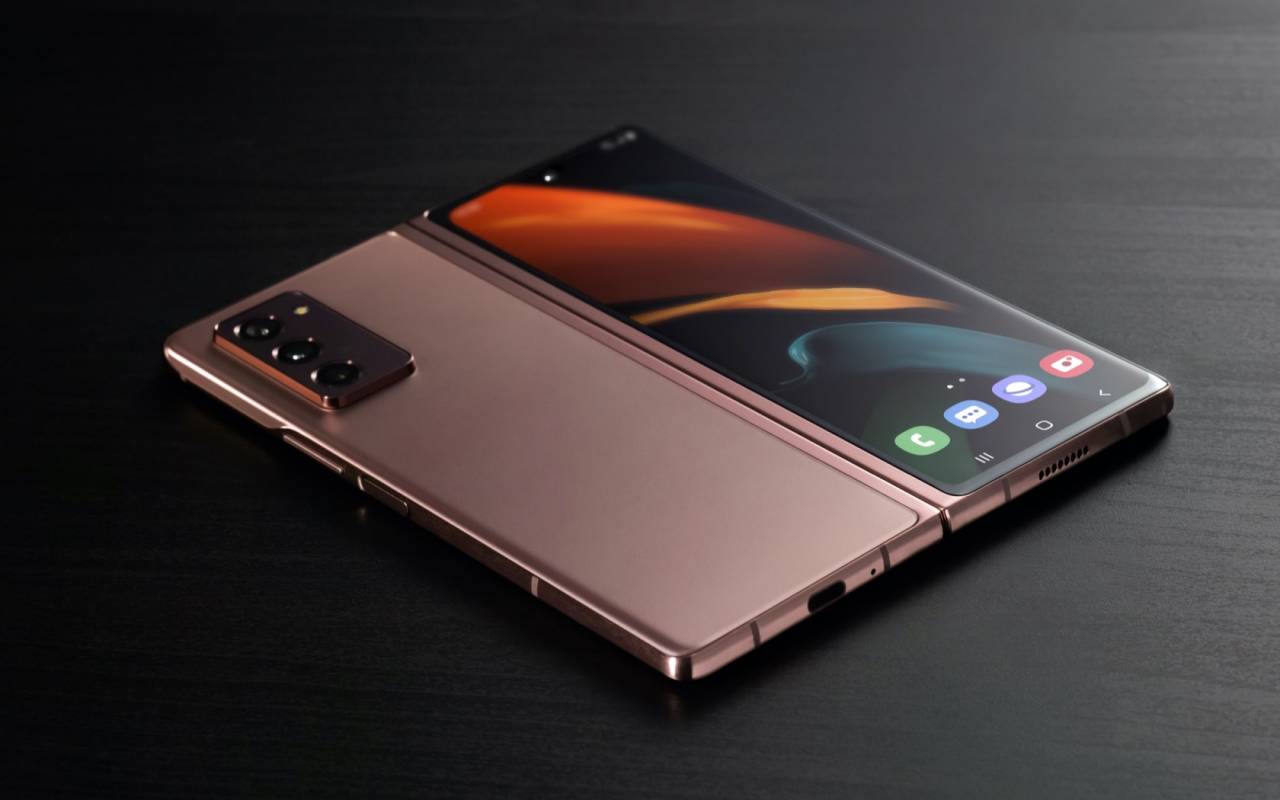 The glass isn’t the only similarity. The Galaxy Z Fold 2’s “Hideaway Hinge” uses the same approach as its smaller clamshell sibling, with a dual-CAM mechanism that can now be opened to any angle rather than just fully-opened or fully-closed. Flex Mode communicates to apps where the display is opened to; opened, closed, or somewhere in-between. Samsung’s camera, video calling, gallery, clock, calendar, and media player apps all support Flex Mode, as do Google’s YouTube and Duo apps.

There are over sixty components in the hinge alone, including the “sweepers” – tiny hair-like brushes – used to keep dust and debris out of the gaps. Samsung says it’s rated to last at least 200,000 folds over five years, or around 100 folds a day, without issue. There’s a factory-installed screen protector, and the hinge gap itself is slimmer than on the first-gen Fold, with increased tension to reduce accidental closings. 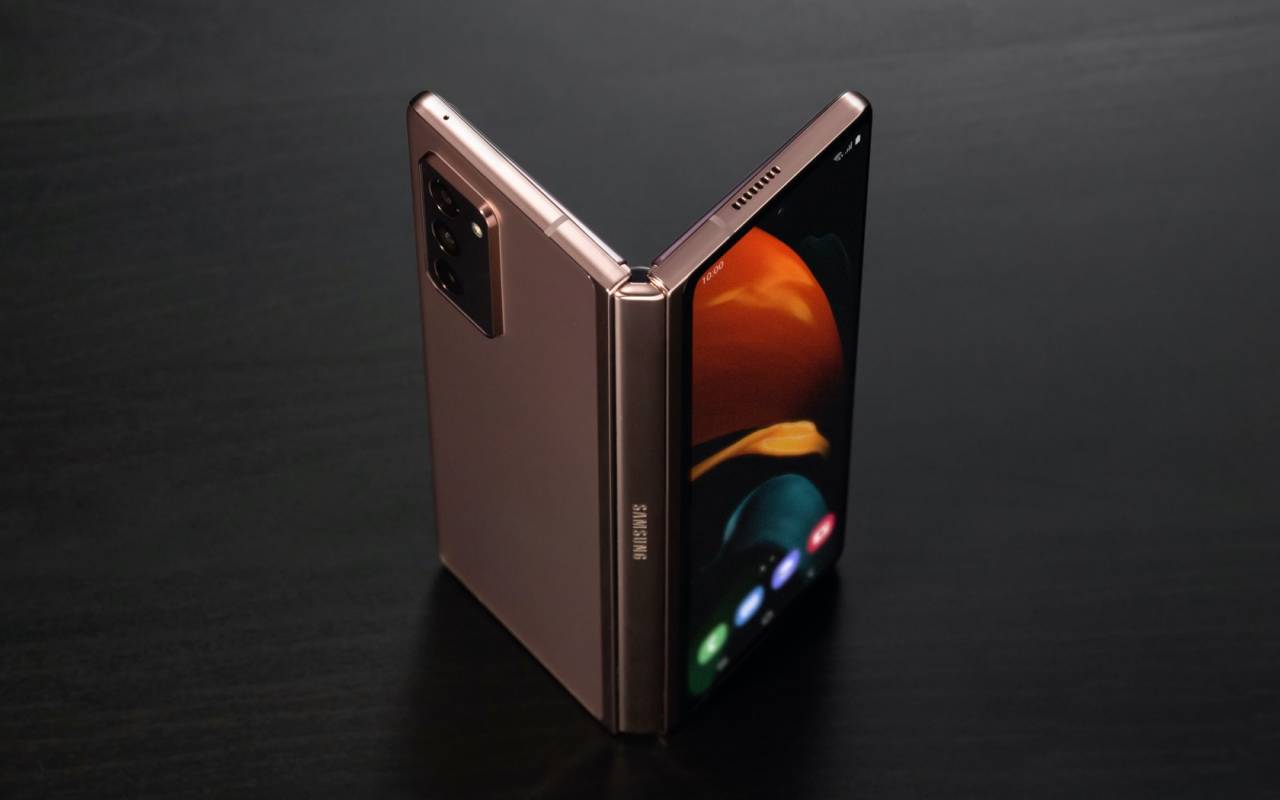 Inside, it’s Qualcomm’s Snapdragon 865+ as in the Galaxy Note 20 Ultra, with 12GB of memory. 5G is standard, with both Sub-6 and mmWave support, as is WiFi 6 and Bluetooth 5.1. There’s NFC, MST, Ultra Wide Band (UWB), a 4,500 mAh battery – split across both halves – with wired and wireless fast-charging, and Wireless PowerShare to use the Galaxy Z Fold 2 as a Qi charger with other devices. A USB-C port is on the bottom, and there are stereo speakers and Dolby Atmos support.

On the back, there’s a similar camera array to the Note 20. The primary sensor is 12-megapixels with Super Speed Dual Pixel AF, OIS, and f/1.8; the ultra wide is 12-megapixels, f/2.2, and has a 123-degree field of view. A 12-megapixel telephoto – with PDAF and OIS – offers 2x optical zoom and up to 10x digital zoom. Video tops out at 4K – not 8K like on the Note 20 Ultra – and you also don’t get the Ultra High Resolution photography that the latest Note offers. 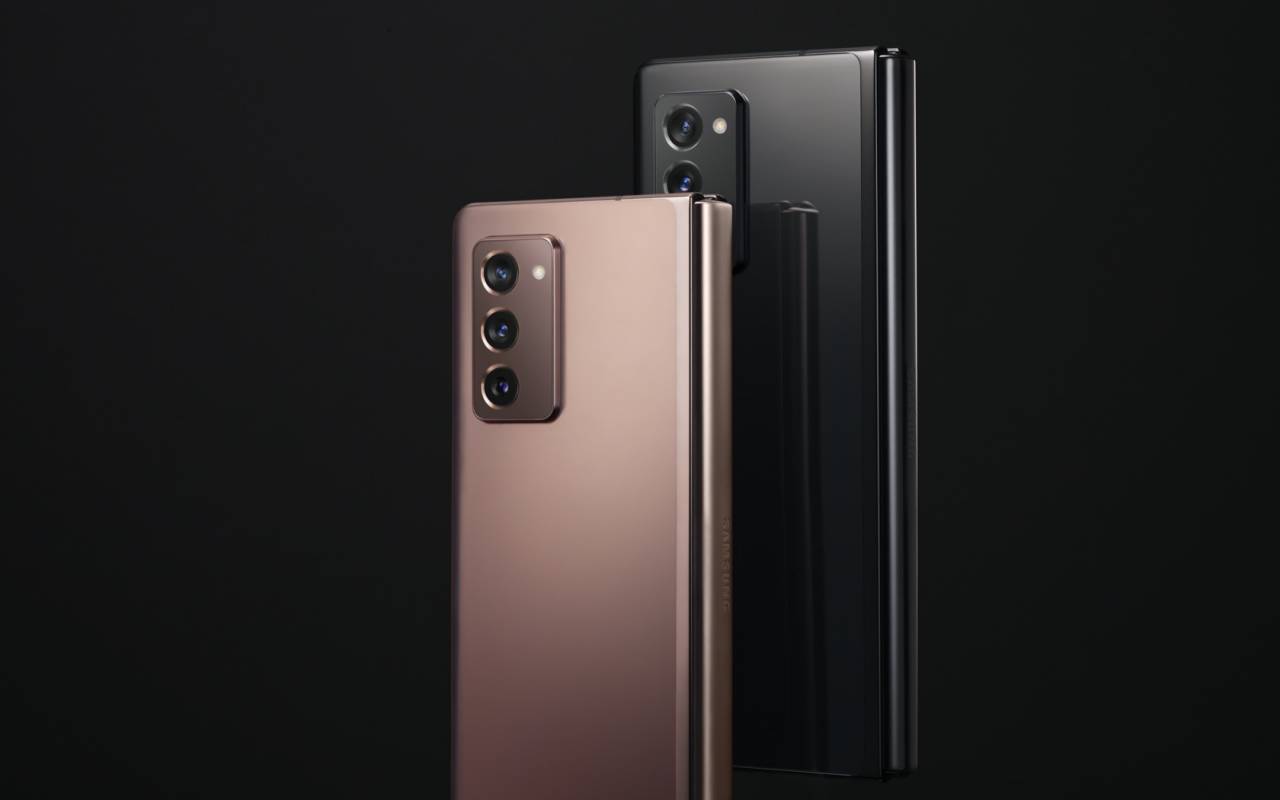 It’s software, of course, where the Galaxy Z Fold 2 stands out. Dual Preview in the camera, for example, shows a full preview of the frame on the outer display; that also makes it easier to use the primary cameras for selfies. You get the same Pro Mode, Night Mode, and Single Take mode as on the Note 20 Ultra, but also an auto-framing camera feature which, with the Fold 2 in Flex Mode stood on a table or other surface, uses machine learning to virtually zoom and pan to keep the subject in frame.

Fold owners loved multitasking – they were more than 7x as likely to use multi-window than even Note owners, Samsung says – and so Android 10 on the Galaxy Z Fold 2 makes that even easier. You can have up to three apps showing at once, and drag-and-drop between them. Take a screenshot, and you get three different pictures – one for each app running – rather than the less-useful single capture of the whole screen. App Pair still allows you to load multiple apps simultaneously from one icon, but now you can link three rather than two.

Samsung has been working with major app-makers to better utilize the larger main panel. In Microsoft’s Office apps, for example, there are more controls in the toolbar visible. Or, you can load up DeX Wireless – using Miracast on a compatible TV – and get a full desktop experience, with support for a keyboard and mouse. Microsoft Your Phone and Link to Windows are supported, but sadly there’s no S Pen option.

That’s not the only annoyance. While internationally there’ll be a 512GB version of the Galaxy Z Fold 2, the US will only get a single configuration with 256GB of storage. Samsung is also taking the headphones out the box this time around, and so you won’t be getting a set of Galaxy Buds thrown in. 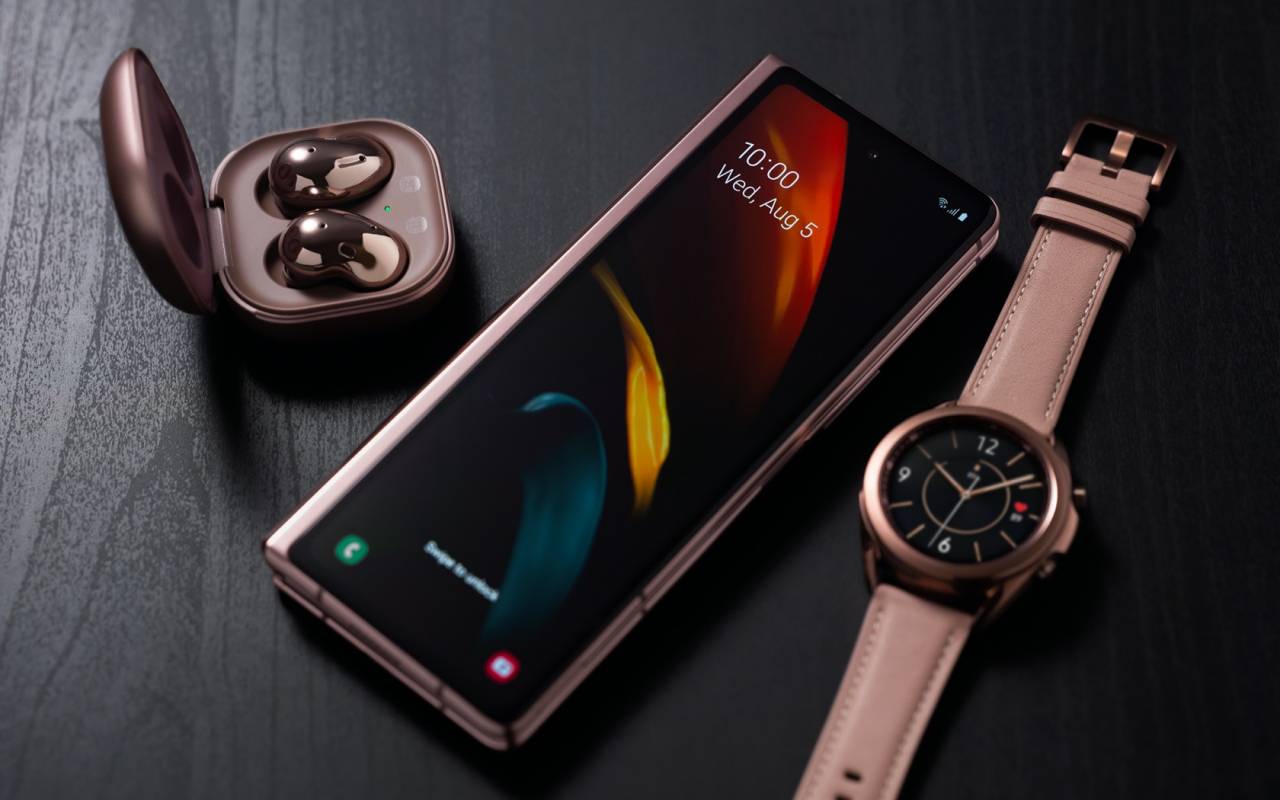 What you do get is the ability to customize the hinge finish. Samsung has two primary colors for the Galaxy Z Fold 2 – Mystic Bronze and Mystic Black – but you’ll also be able to choose from metallic red, silver, gold, and blue for the hinge itself. Owners also have access to Galaxy Z Premier Service, with faster access to product support, a one-time display repair for accidental damage in the first year for $149, and now VIP perks too. That includes a year’s membership to Founder Card, a meal at a Michelin star restaurant, and an elite fairway golf club program.

If you want maximum fanciness from your foldable, however, you probably need the Galaxy Z Fold 2 Thom Browne Edition. That has an exclusive geometric grey finish with a multicolor stripe, leaving the phone looking like it’s clad in fabric. There’s custom software too, like a new lock screen design.

In the box with the special version of the phone is a matching Galaxy Watch 3, Galaxy Buds Live, and a number of other accessories like a carrying bag and case. You pay handsomely for all that, mind. When the Galaxy Z Fold 2 Thom Browne Edition goes up for preorder on September 2, it’ll be priced at $3,299. Deliveries start from September 25.