This morning the Samsung Galaxy Z Flip was leaked in full, front and back, with press images posted in Germany. This device has a foldable display that gives the device a standard smartphone sort of look when open, then a flip-phone sort of look when closed. This device has a 22:9 aspect ratio and a handsome look both front and back – and what’s that, a secondary display?

The display on the inside of this device is 6.7-inches AMOLED with an Infinity-O design – which means it’s got a single, centered forehead punch hole for its front-facing camera. This display is 2636 x 1080 pixels dense and has “Always On” functionality, much like a Galaxy S10 or Note 10.

The exterior display is 1.06-inches in size, 300 x 116 pixels dense, made with Super AMOLED technology. This display has Always On tech as well, and is covered with Gorilla Glass 6 reinforced glass. The exterior colors that’ll likely be made available first at Black and Purple – we’re seeing the Purple version above.

The Galaxy Z Flip has two sets of dimensions, one open, one closed. The open dimensions are tipped today to be 167.9 x 73.6 x 6.9-7.2 mm, while the closed dimensions are 167.9 x 73.6 x 15.4-17.3 mm. There would appear to be a single fingerprint reader on the side of the device, and it’s suggested that this smartphone comes equipped with smart Facial Recognition for secure login. Also onboard: Knox 3.4.1 for security, and Samsung’s Secure Folder feature.

The Galaxy Z Flip is rumored today to have a 3300mAh battery and quick charging up to 15watts – with Qi standard wireless charging up to 9 watts. That’s a strangely… low… capacity/speed there, so we’ll see about that one when the time is right.

UPDATE: More images incoming! Take a peek at the gallery below to see this device from multiple angles – and see if you can spot the secondary display! 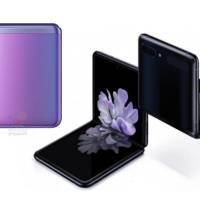 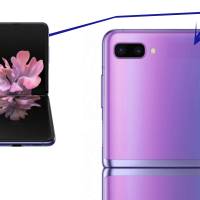 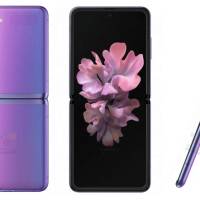 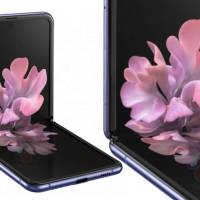 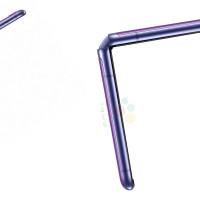 The one version of this device we’re yet aware of, per the leaks, is a Galaxy Z Flip with 8GB RAM and 256GB internal storage – UFS3.0. There’s no microSD card slot here! The processor we’re looking at in leaks is a Qualcomm Snapdragon 855+ (7nm), and we’ll likely see Android 10 right out the gate with Samsung One UI 2.0 straight away.

The Samsung Galaxy Z Flip will likely be revealed on February 11, 2020, at the next big Samsung event. The Galaxy Z Flip will be made available shortly thereafter – likely on February 14, 2020, Valentine’s Day. Pricing on this device likely starts at around 1500-Euro in Europe and around $1499 USD in the United States – but we won’t know until Samsung says for sure – so stay tuned!