Samsung has officially revealed the Galaxy S4 Zoom, bulking out its Galaxy S 4 flagship with a 16-megapixel sensor, a 10x optical zoom, and a Xenon flash. The new smartphone-camera hybrid is part of the Korean company’s mission to make “an industry-leading smartphone, and a high-end compact camera” in one device, which started with the original Galaxy Camera.

On the phone side, there’s a choice of 3G HSPA+ and LTE versions depending on market, all powered by a 1.5GHz dualcore processor (which Samsung says will vary, again depending on market). There’s a 4.3-inch qHD Super AMOLED display – covered with a sheet of Corning Gorilla Glass 3 – along with 8GB of internal storage (of which around 5GB is user-available) and 1.5GB of RAM, with a microSD card slot.

Connectivity includes WiFi a/b/g/n (5GHz) as well as Bluetooth 4.0 and NFC; you also get A-GPS and GLONASS, an accelerometer, digital compass, proximity sensor, gyroscope, and light sensor. The battery is a 2,330 mAh pack, though Samsung isn’t saying how long it’ll last. 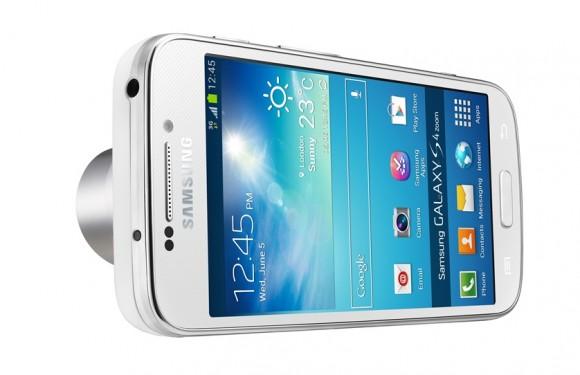 That’s a big question, too, as the Galaxy S4 Zoom packs some pretty impressive camera features. There’s a 16-megapixel CMOS sensor with optical image stabilization and a 24-240mm 10x optical zoom, with an F3.1-F6.3 lens. On the front, there’s a 1.9-megapixel camera for video calls.

ISO 100-3200 is supported, and up to 4fps burst photography with autofocus. There’s a Xenon flash, rather than the usual LED, and support for recording up to 1080p30 HD video.

On the software side, as well as TouchWiz on top of Android 4.2 Jelly Bean, as we’re familiar with from other Galaxy S4 series phones, there are various new camera-specific features. The Smart Mode from the Galaxy Camera and Samsung’s standalone point-and-shoots is carried across, as are things like Drama Shot and Action Freeze. There’s also Photo Suggest, which uses online libraries of photos in common places to suggest the best location and angle.

There’s also Samsung Zoom Ring, which, if twisted when in a call, automatically kicks into camera mode, lets you snap a photo, and then send it via MMS to whoever you’re talking to. It’s also used to control the optical zoom.

The Samsung Galaxy S4 Zoom will go on sale this summer, though the company is yet to confirm pricing.