Samsung has officially revealed the Galaxy S III Mini, and our fears have been confirmed: while we hoped for a distillation of the Galaxy S III into a smaller chassis, the new phone has lost charm as well as bulk. Fronted by a 4-inch Super AMOLED display running at a measly WVGA 800 x 480 resolution, the Galaxy S III Mini runs Android 4.1 Jelly Bean on a 1GHz dual-core processor, with TouchWiz and Google Now.

Inside there’s triband HSPA and quadband GSM/EDGE, along with WiFi a/b/g/n and Bluetooth 4.0; you also get NFC – with support for Samsung’s own S Beam on top of Android Beam – as well as GPS and GLONASS support. An FM radio is included, together with the usual gyroscope, digital compass, proximity sensor, and accelerometer.

Unfortunately, the 8-megapixel camera of the full-sized Galaxy S III hasn’t been included, with the Mini instead getting a 5-megapixel main camera with autofocus and an LED flash. The front-facer is down on megapixels too, running at only VGA resolution. 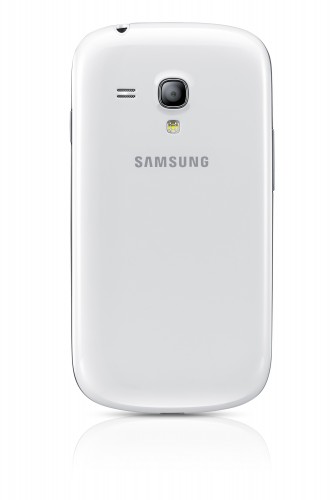 No word on availability or pricing, but we’re guessing soon and relatively cheap. Update: Vodafone UK confirmed to us that it will be carrying the Galaxy S III Mini, though can’t say when or for how much. UK retailer Clove has priced the phone up SIM-free at £249 (£298.80 inc. tax).