As Samsung continues their path down the common-design road, they’ve revealed the GALAXY S DUOS, a smartphone that looks basically the same as the Galaxy S III, but with support for two SIM cards instead of just one. This device will be available starting in September across Europe and, according to Samsung, will be “rolled out across other territories” soon thereafter. This device has a 4-inch WVGA 480 x 800 TFT LCD display, a 5-megapixel camera on the back, and Android 4.0 Ice Cream Sandwich.

It appears that Samsung is making sure the Galaxy S III stays on top as this device very much appears to share the styling of that hero device, but does not stay up to speed with specifications. This device is just a bit smaller in all ways, holding 4GB of internal memory in its only iteration and working with a microSD card slot that can use up to 32GB cards. The GALAXY S DUOS also has the ability to work with Bluetooth 3.0 and has a 1500 mAh battery inside.

With it’s dual-SIM functionality, you’ll be able to have two phone numbers on this one single phone. With its “Dual SIM Always on” feature you’ll be able to receive calls from both numbers at one time. You can also decide to use data one card and voice on the other – whatever you want! 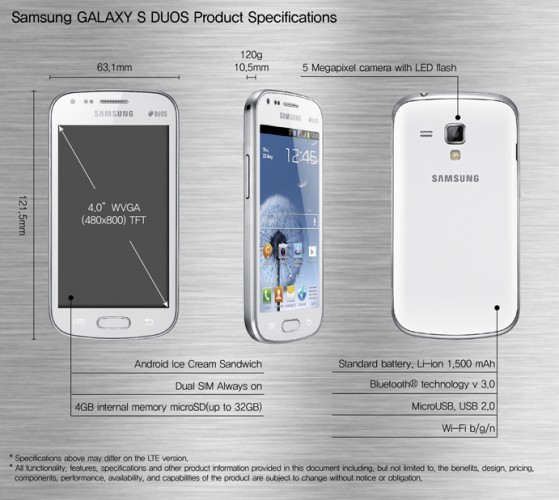 You’ll also be getting Samsung’s full array of next-generation apps that work on Samsung devices specifically such as ChatON for fun multimedia chat. Have a peek at our timeline below of Samsung Galaxy S III hands-on and reviews to see what else the software will be bringing. Also stay tuned as the pricing and final release information for this device appears!