This week the Samsung GALAXY S 4 was revealed in New York City at the legendary Radio City Music Hall with a barrage of Broadway stars playing roles to show the life-friendly features of the new device. If you’re all about the Broadway-way of presenting a story, this epic set of oddities will be right up your alley – Fosse style go! Of course, on the other hand, if you’ve been to or watched the majority of the press event keynotes from mobile market presenters over the past couple of years and love the Apple way of doing things (rather simple), you’ll find yourself baffled by the intensity.

From start to finish, this presentation by Samsung is at once a now-classic “Unpacked” presentation of company wares and an utterly fanciful mishmash of dance moves and singing. WIth the Samsung GALAXY S 4 the company has presented a set of four everyday life enhancing pillars that we’ve also outlined for you in four distinct articles. Peruse those beasts in the timeline below while you hear the New York-style wildness here and now.

The Samsung GALAXY S 4 has taken the company to a place where they’ve decided to rely on a winning hardware design while moving forward with software features galore. If you’re familiar with the Samsung Galaxy S III, you know that the nature-inspired hardware has been appearing in Galaxy devices across the board ever since the smartphone launched last year. In the success of that device and subsequent Note devices, Samsung has stayed strong with brand-specific software connections such as Group Share and S-Beam, not to mention ChatON and note-taking apps galore. 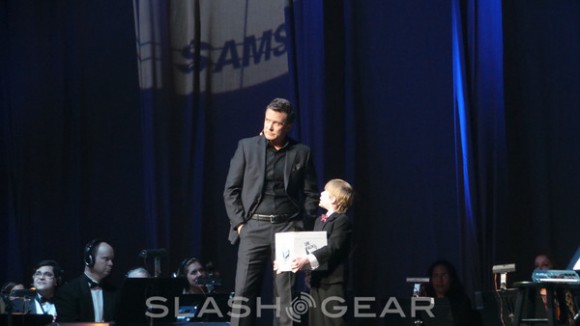 That little weird kid was there too – don’t forget him! After you’ve seen the video, have a peek at the timeline below for all the information and hands-on action you could possibly handle from the Samsung GALAXY S 4 – and get pumped up for the full review coming on sooner than later!