There’s a who gush of new devices appearing in the early release tip mill this week, the largest of which is in the Galaxy Note category. This is the Samsung Galaxy Note Pro 12.1, the largest Samsung Galaxy Note to see the light of day, made with the power to take on tasks that previous iterations of the Note series simply could not. It’ll be interesting above all else to compare to power of this device to whatever “Tab” the company releases soon after.

The Samsung Galaxy Note Pro 12.1 is pictured above courtesy of an early viewer from Seeko in Korea. This image shows what may at first appear to be the Samsung Galaxy Note 10.1 2014, but given the amount of space between the left-facing speaker and the headphone jack, as well as the length of said speaker, we’re looking at a tablet that’s significantly larger. In other words: this machine will very closely replicate the look and feel of the Galaxy Note 10.1 2014 edition. 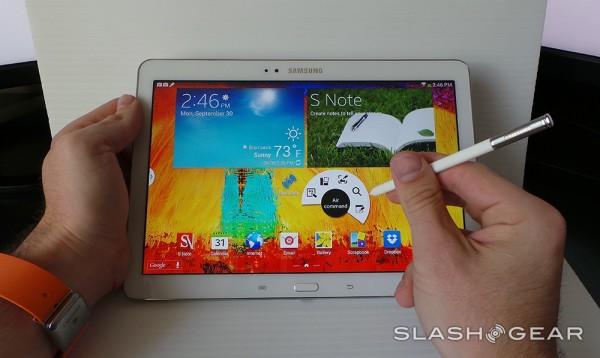 This device has not been given a list of specifications, nor has it been detailed at length. The folks at SamMobile have suggested the Galaxy Note Pro 12.2 will work with 32GB of internal storage, but that’s just about all we can wager to guess – beyond the normal Galaxy Note improvements, of course.