The most unique feature of the Galaxy Note smartphone series is getting an upgrade according to the latest leaked info on the subject. The S Pen for the Samsung Galaxy Note 9 will, at long last, see a substantial set of differences vs the last several years of releases. Not that Samsung needs it, as the Galaxy Note series hasn’t had any substantial competition for the Note since inception – strange, isn’t it?

Several different ways of accomplishing a major upgrade to the Galaxy Note 9’s S Pen were explored by Samsung, according to sources familiar with the subject who wish to remain anonymous. Samsung explored Bluetooth connectivity between the S Pen and the smartphone for an expanded set of features. Therein, Samsung explored wireless charging abilities between the S Pen and the Galaxy Note, connecting in the home slot for the S Pen – making the whole process feel entirely natural to the average Note device user. 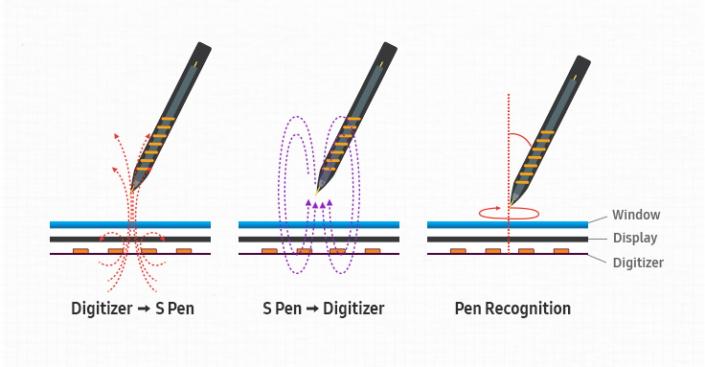 Before exploring Bluetooth for the S Pen, Samsung’s used electromagnetic resonance (EMR) technology. Because of EMR, the S Pen was all but disaffected by water. The same cannot be said for non-connected styli and the average user’s fingertip. Because Samsung already accomplished this, there was no going back – any solution that resulted in less “magical” results, so to speak, would not do the trick.

Above you’ll see diagrams of the previous S Pen, largely unchanged for the past several years. A combination of under-display hardware and in-S Pen hardware made a non-electric connection possible. To move forward, Samsung’s apparently decided to place their faith in Bluetooth.

Moving to Bluetooth with the S Pen allows Samsung to explore different technologies with the Galaxy Note display. No longer restricted by the requirements of the in-display tech for the S Pen, Samsung will (next year) be able to include an in-display fingerprint scanner.

Moving to Bluetooth also allows Samsung to initiate additional functionality in the S Pen outside the Galaxy Note display. One could place the device 20 feet away and press the S Pen button to snap a photo. One could control games inside the display with the S Pen’s accelerometer – if that is indeed part of the plan.

UPDATE: It would seem that AllAboutSamsung‘s Max has some ideas for the newly-minted Bluetooth S Pen too. Using any surface as a pad for writing or drawing, seeing the results on the Note, using the S Pen as a wireless speaker, using the S Pen as a wireless mic-toting speakerphone – all valid possibilities! It all depends on what Samsung’s ended up being able to fit in that tiny, tiny piece of equipment.

It’s safe to assume Samsung’s figure out a way to make the S Pen just a BIT bigger this time around. Not that any early renderings for cases have shown that just yet – but it’s possible!

We’re expecting the Galaxy Note 9 to appear in an event on August 2nd or 9th. Thereafter we’ll likely see the device go up for pre-order within a week, then on sale a few weeks later. It’d be shocking to find the device unavailable by mid-September. Shocking indeed!

A few years down the line, who knows – maybe we’ll have transparent LED tech up in here so front-facing cameras can peek through only when they need to. Moving to alternate wireless tech for the S Pen allows Samsung to go buck-wild with the display. Anything that’s possible on the Samsung Galaxy S series will be possible on the Note – the two will follow one-another even closer than before.