It’s time to grab hold of the next massive smartphone/tablet hybrid experience from Samsung, this time in the form of the phonecall-capable Galaxy Note 8.0 releasing in the UK today. This device will be available around the world soon and very soon, but for now we’re working with the basic wi-fi edition in the greater United Kingdom. This version of the device does not have the ability to connect to mobile data, therefor rendering its phone call abilities as limited to your 3rd party apps – but yes, you can speak into it however you like.

As there is indeed a speaker above the logo on the front of this device and yes, there is a microphone down near the bottom, you can use this “Note” device as a phone if you have some web-capable call service in mind. In the future, carrier editions of this device will be revealed on 3G networks internationally – sorry USA, you’re out of luck. This device works with an 8.0-inch WVGA display at 1280 x 800 pixel resolution – that being 189PPI for those of you wondering.

Have a peek at our full Samsung Galaxy Note 8.0 hands-on experience now!

You’ve got a 5 megapixel camera on the back, a 1.3 megapixel camera on the front, and a brand new S-Pen for artistry galore. This S-Pen device fits in to the smart device itself, allowing you to keep it with you without a second through – much like each of the Galaxy Note devices revealed before today. This device also works with 2GB of RAM backing up a cool 1.6GHz quad-core A9 processor (Exynos) and a selection of custom apps made for Samsung devices exclusively. 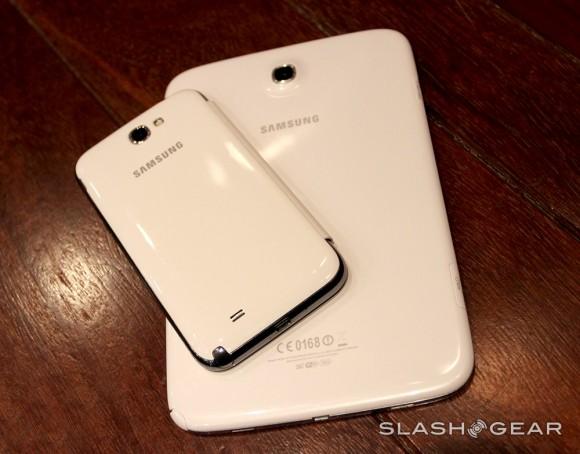 One example is Flipboard, this version of the app allowing your Samsung Galaxy Note 8.0 (and the GALAXY S 4, mind you) to preview stories while you hover above them – here with your S-Pen, there on the GALAXY S 4 with your finger! This device is just as thin as your Samsung Galaxy Note II, comes in every color you can imagine – just so long as it’s white, and will fit in perfectly with your Nature-themed Galaxy devices into the future.

This release of the device comes with the following as a bit of a bonus collection:

• A £20 voucher to spend in the Samsung Learning Hub
• A Two Month Free trial subscription to The Times newspaper worth £32.00
• AVG Anti-Virus Pro
• Access to the Samsung Music Hub for free for 1 month
• Need for Speed Hot Pursuit
• Sonic the Hedgehog 4: Episode 2
• 50GB DropBox free for 2 years

This device will be available starting today for a cool £339.99 GBP and will be coming to the USA soonish – no official word has been sent out yet as to when that’ll be. Stay tuned and let us know if you’re up for it!