The Samsung Galaxy Nexus (aka Nexus Prime) has apparently leaked on video, with the first live shot of the Android 4.0 Ice Cream Sandwich smartphone emerging ahead of its official launch next Tuesday. The video shows the 4.65-inch Android handset in action, according to the video uploaded by Mobilissimo, while screenshots purportedly from the Galaxy Nexus seemingly confirm that Ice Cream Sandwich will be Android 4.0.

As for specifications, there’s still some uncertainty around what will and what won’t be inside the handset. Initially a 5-megapixel camera and Verizon exclusive were tipped, along with a 1.2GHz TI dual-core processor, shortly followed by word of Samsung’s own 1.5GHz chip taking center stage and a more impressive 8-megapixel camera on the back. This latest report confirms the 5-megapixel camera, however, though it’s unclear whether that’s based on new information or the earlier leaks. 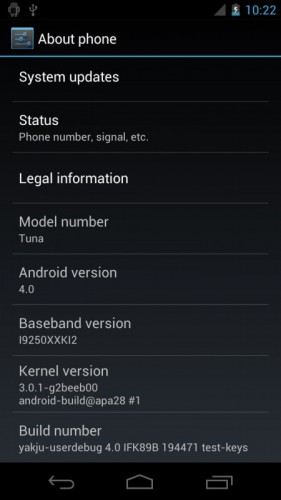 Site Gadget.ro also has the same video and images, uploaded on the same day, so it’s unclear who actually grabbed the footage first. Still, we won’t have long to wait before the real thing – Samsung is expected to launch the Nexus Prime with Google next week at CTIA 2011, and we’ll be there to bring you all the details.