This week Samsung has revealed a brand new take on projecting content, namely slotting this technology in an Android Samsung Galaxy smartphone with the Samsung GALAXY Beam. This is not the first time a smartphone has been integrated with a projector in this way, but judging by this first look we’ve had at the GALAXY beam, “Sharing Big Fun and Big Ideas” is much more real than ever. This device is the world’s slimmest projector phone at 12.5mm with a round back for an extra comfortable grip. Samsung aims to improve both the size of the device (making it as small as ever) and the quality of the projector – now a 15 Lumen brightness with NHD 640 x 480 resolution model running with this device’s dual-core 1GHz processor under the hood.

This device’s display is a 4-inch WVGA while the projector, again, runs at 640 x 480 up against your wall. You can use this device to project on to your ceiling, your wall, a gigantic screen outside your house, and more. The device runs a 5 megapixel AF camera on the back so you can capture fine videos to project from the projector, and the battery is a 2000mAh so you can project for as long as possible. The lamp has an LED life of 20,000 hours (essentially permanent) and the battery life is set to be improved while the device goes through its final design iterations. 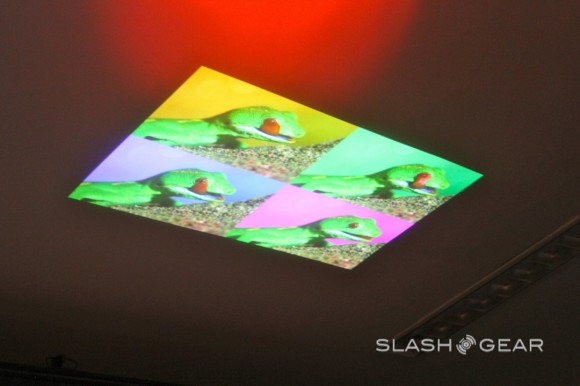 The Samsung Galaxy Beam has a Ebony Gray tactile feeling non-slip back with a yellow band around the entire unit for a “youthful feel” for the entire experience. The entire unit is relatively light, has the ability to catch your eye from afar (in more ways than one) and will be coming to the market inside 2012. The projection quality is amongst the nicest we’ve seen for a projector this size. Videos look fabulous, there’s absolutely no flicker or break in the projection in any way, and the idea of projecting as a real-world use case suddenly seems like a real possibility for everyday life. 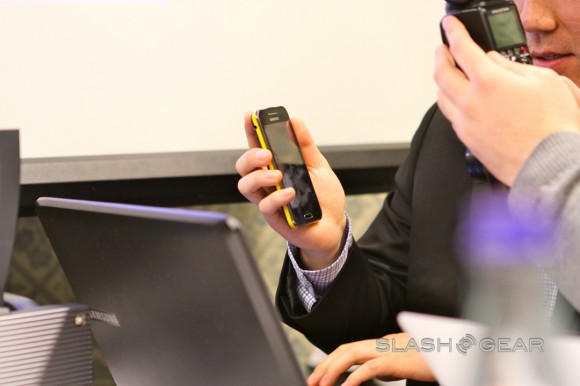 Once you project you’re able to manually refocus your image, and accessories are in the works – such as stands, for example, so you can make full use of your new projector smartphone in the wild. A fun bit of information here on projecting, too – if you hold the device flat, it’ll project the image in landscape, while if you hold the device diagonally, the image is in portrait. Again the software is not final when we’re getting to see it here, and such items as automatic keystone fixing are not going to be available at launch, but such improvements will be available at the upgrade to Android 4.0 Ice Cream Sandwich. This device will be available in the second quarter of 2012 in Europe and no announcements have been made in regards to a USA launch.

Check out the rest of our Mobile World Congress 2012 coverage as well as all the hot Samsung action by heading to the [MWC 2012 portal] and the [Samsung portal] all this week! 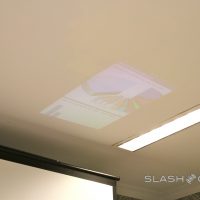 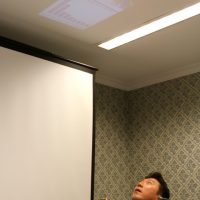 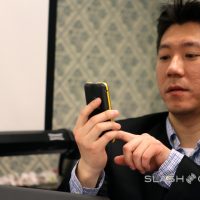 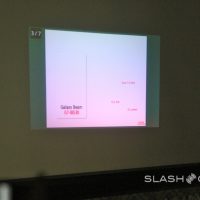 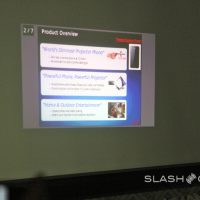 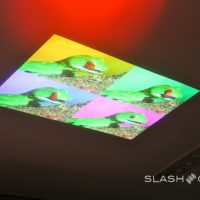 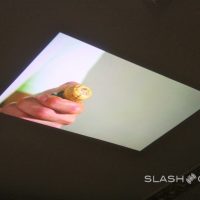 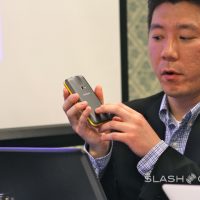 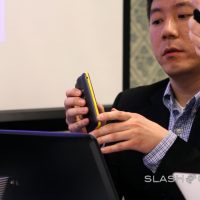 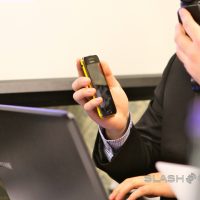